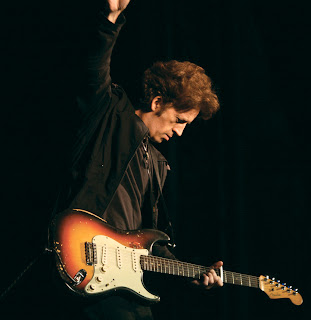 Willie Nile is yet another huge favorite of mine who, as far as I was concerned, came out of nowhere. It was Lincoln, the Concert Director at McCabe's, who suggested that I catch Willie's show, his first ever at McCabe's, so I did.

With his passionate singing, countless songs of superior quality and rock star moves, Willie blew me away. Although short of stature, he radiated power, energy and confidence, but then off-stage, after the show, he appeared to be just a regular guy, happy to chat with his fans.

His 2008 and 2009 shows were somewhat similar, and I don't mean it in a negative way - both shows were great. Drummer Frankie Lee and guest Creed Bratton, of the Grass Roots and The Office fame, provided able support on both occasions.

Naturally, the June 2008 gig focused primarily on Willie's then-current album, "Streets Of New York". My favorites were "Cell Phones Ringing (In The Pockets Of The Dead)" and "The Day I Saw Bo Diddley In Washington Square". His rousing rendition of "I Wanna Sedated", one of the signature songs of the Ramones, brought the house down. After the show, I had the chance to shake hands with Willie and tell him how much I enjoyed his show. He then autographed the live CD I bought right there.


In September 2009, Willie played most of the songs from his outstanding just-released album "House Of A Thousand Guitars", but sadly skipped "Now That The War Is Over", arguably the best song of the album. But he did play most of my other favorites, "Magdalena", "The Midnight Rose", "House Of A Thousand Guitars" and "Give Me Tomorrow". There were also a few new numbers, among them "One Guitar" and "Innocent One". Just like in 2008, Willie played a few songs while accompanying himself on the piano.

I went to the show with my friends Michael, Nicole, Sabine and her boyfriend, who all had a fabulous time.