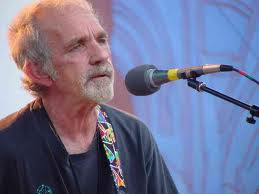 This was the second of two sold-out shows at McCabe's, part of a small-scale national tour. Why I had skipped J.J. Cale's earlier appearances at McCabe's is a mystery to me, but I finally got the wake-up call in the form of his "Roll On" album, an exceptionally listenable release featuring J.J.'s trademark sound and rhythms. I got to McCabe's early, so I was among the first ones in line. Parked directly in front of the guitar shop was J.J. Cale's huge tour bus, an unusual sight for what primarily is a folk music venue. I managed to grab a seat in the front row. The best was yet to come.

Throughout the show, J.J.'s voice was somewhat weak, but his guitar work was superb, and so was his band, consisting of Bill Raffensperger on bass, Walt Richmond on keyboards, David Teegarden (electronic synth) and James Cruce on drums. Keyboardist Skip Knape joined them later for a song or two. The song selection could not have been better.
After the ninth song, J.J. told the crowd that two guests would be joining him. "I don't have to tell you their names, you'll know who they are", said J.J. and out came Tom Petty and Mike Campbell. The crowd responded accordingly.

Tom kept a relatively low profile, playing guitar just like a regular band member would do. He sang only one song, J.J. Cale's "I'd Like to Love You Baby". Playing his electric guitar, Mike Campbell was far more visible, delivering a few out-of-this-world solos. Surprisingly, Tom and Mike stayed on to the end of the show, then they came out again for the three-song encore as well, to our collective delight.


COMPLETE SET LIST
King City
Out Of Style
Low Down
Don't Cry Sister
Since You Said Goodbye
Magnolia
Walt's Boogie
Roll On
Instrumental by T-Bone Walker
Crazy Mama
After Midnight
I'd Like To Love You Baby (Petty - vocals)
Thirteen Days
Tijuana
Cocaine
Call Me The Breeze
I'll Make Love To You Anytime
Travelin' Light
Most songs featured extended laid-back instrumental jams of stunning beauty and being there, just one step away, was priceless. A bootleg recording of the concert is available on the Internet.
The show was opened by Pieta Brown and husband Bo Ramsey, assisted by the legendary Don Was on upright bass. Their set was very good - I liked Pieta's songwriting, voice and singing style and I enjoyed Bo Ramsey's guitar playing. 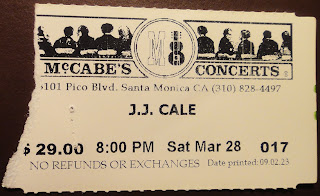