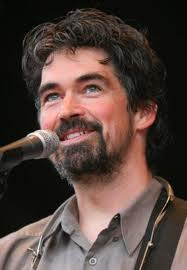 Last night I saw Slaid Cleaves in concert for the second time and unlike in 2006, when I went to see him on a whim, this time I showed up with my homework done: I knew exactly what to expect, I knew many of the songs, so naturally, I enjoyed my second outing a whole lot more.

No doubt, Slaid is one of America's best singer-songwriters, capable of churning out one great song after another. And he's a heck of a performer, too. I like his vocal inflections and I absolutely love his soulful phrasing - no one sounds quite like him. The stories he tells in between songs are engaging without being exceedingly long and there's good humor in everything he says. But there's one negative aspect I feel compelled to bring up: with very few exceptions, Slaid's show at McCabe's consisted of songs of pretty much the same tempo and similar structure. There was plenty of variety when it came to story lines, but from a purely musical standpoint, there were few roller-coaster rides in his performance, with one notable exception: his fabulous yodeling, of course, which came out of the blue during "Horses And Divorces" and generated the crowd's loudest response of the evening.

Most of the songs he sang were self-penned, and when they were not, he duly acknowledged the respective writers, as was the case with two of Karen Poston's songs ("Flowered Dresses" and "Lydia") and Woody Guthrie's lyrics, which Slaid set to new music to create the gorgeous "This Morning I Am Born Again".


A very able Chojo Jacques accompanied Slaid on mandolin and fiddle for most of the evening. His solos were understated and subtle - at no time did he attempt to outshine the headliner.

A few words about my first encounter with Slaid Cleaves in 2006. I went to McCabe's with my friend and coworker K, also a novice to Slaid's music. We both agreed that the show wasn't bad, just a bit monotonous. To some extent, that assessment was still valid in 2011.