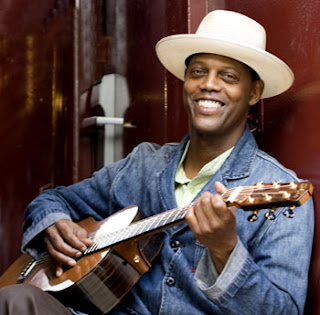 I went to my first-ever Eric Bibb concert without knowing much about the artist - it was 2003, two years before the founding of YouTube, so there weren't as many music sampling opportunities as we have today.

Eric came out, said hello and started playing - two songs later I knew that I was in for a true treat.

Eric is great at everything a singer-songwriter is expected to be great in - composing good tunes, writing meaningful lyrics, playing the guitar with skill and virtuosity and singing with soul and passion. He's good at picking cover songs, too. Now throw in his good looks and wonderful personality and what you get is a top-notch artist, someone truly unique, who makes you wonder why he isn't better known in the States.


Here's a YouTube video that demonstrates what I mean:


Needless to say, after my hugely enjoyable introduction to Eric Bibb's music, I had to see him every time he came back to McCabe's. For his June 23, 2006 concert, I took along two Latino friends and co-workers, both new in the country, both quite worldly, but decidedly deficient when it came to American classic gospel, blues and folk music. The concert was a big hit with both of them and I felt great for having introduced them to something so distinctly American. Just like in 2003, Eric was warm, friendly, humorous and sang his heart out. With songs such as "Shingle By Shingle", "I Heard The Angels Singing", "In My Father's House", "Champagne Habits", "Don't Ever Let Nobody Drag Your Spirit Down", "Needed Time" and many others, Eric delivered a knock-out punch that's hard to forget.

Eric's appearance in 2008 came with an added attraction, namely bassist-extraordinaire Danny Thompson, well known to me from his association with Richard Thompson. Danny was there for the entire concert, and so was drummer Larry Crocker.

Once again I have to credit McCabe's for having exposed me to Eric Bibb, a musician of the highest caliber and someone I would have probably not discovered on my own.


For more of Jay Matsueda's concert photos you may want to visit: 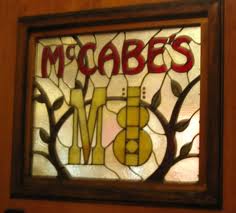