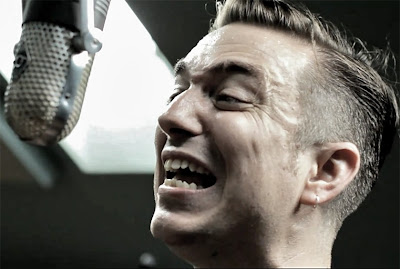 I'm afraid I'll run out of superlatives before I finish this short write-up. Last night at McCabe's, JD McPherson came out of nowhere to deliver one of the best concerts I've ever seen there. I said "came out of nowhere" simply because JD is a late-bloomer with a strikingly short resume - although he's in his mid-thirties, he has only one album under his belt. But what an album it is!

Sometime in April, I bought my concert ticket on the strength of JD's "North Side Gal" video, which was an instant knock-out with me. I showed up at McCabe's with a heightened sense of curiosity and excitement, wondering whether JD's excellent debut album and catchy video could possibly be matched by his live show. And it wasn't only me - there was a buzz in the air last night at McCabe's, some sort of a tension one could almost touch.

About JD. He's exceptionally likeable. Great personality, without a trace of an attitude, and up there on the stage he was just "one of the guys". Plays with a lot of intensity and abandonment. Has a sense of humor. Great guitar player. An outstanding songwriter as well. Has a voice that's seemingly made for the kind of music he does, namely old-school rockabilly, country-flavored rock & roll, with a touch of ska and blues thrown in just for fun. A tireless performer. Gave the crowd a generous four-song encore.  Classy enough to acknowledge the Americans, the evening's opening act.

In certain ways, JD reminded me of Willie Nile, with whom he has a couple of things in common: a huge heart and boundless energy, all housed in a small body.


The music was loud and I would not have wanted it any other way - that's how rock & roll is supposed to sound. I liked the way JD mixed his own songs with a few old classic numbers, such as "Farmer John" and Chuck Berry's "Oh Carol". Exceptionally good was "Oil In My Lamp", an old religious tune recorded by the Ska Kings, among others.

We got to hear most of the songs from his debut album and they all sounded great. The uptempo "Fire Bug" and "Wolf Teeth" were particularly effective, but then so were the slower "A Gentle Awakening" and "Signs And Signifiers". "North Side Gal" was fabulous, even though there were a few slight deviations from the recorded version.

A great musician deserves a great band, and that's what JD had - a great band. Jimmy Sutton is possibly the best upright-bass player I have ever seen. Hearing him play was a joy and it'll be hard to forget his intense facial expressions and body language. Moreover, as a special bonus for me, he was wearing the same "Bethlehem Steel" T-shirt I noticed and liked in the "North Side Gal" video. And he can sing, too. Bo Didley's "You Don't Love Me, You Don't Care", featuring Jimmy on vocals, was one of the best moments of the evening. By the way, Jimmy Sutton is the producer of JD's only album.

Everyone else in the band was great - drummer Jason Smay, keyboardist Ray (last name?) and a saxophonist whose name I did not catch. The latter's contribution deserves a special mention, as it helped preserve the overall sound of the album.

The show was opened by the Americans, a local band that seems to get better and better every time I see them. Their power-rockabilly style was a perfect match for JD's music. 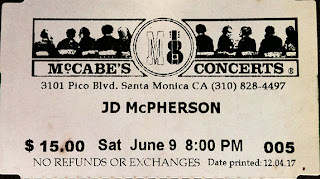