Midway through Sunday night's Ernest Troost concert at McCabe's I started asking myself whether the guy can write a bad song. Or at least an average one. By the time the show ended, I knew the answer: he absolutely cannot.

As much as I liked Ernest's singing and guitar playing, what impressed me the most was his songwriting. He may not have the name recognition of a Richard Thompson or a John Hiatt, but when it comes to musical output, I truly believe that Ernest's songwriting is right up there with the very best. There aren't too many singer-songwriters out there who can play a full set without including a musical blunder or two. Well, there weren't any blunders in Ernest's set last Sunday, a truly amazing accomplishment.

The show started with a short set delivered by Nicole Gordon, a vocalist with a long history of collaboration with Ernest. She was accompanied by Johnny Hawthorn, an accomplished player of string instruments and a back up singer named Laurie LeGore. Nicole sounded good, but the best was yet to come.

After a short intermission, Ernest Troost came out with an acoustic guitar and without saying a word he launched into "Resurrection Blues", an exceptionally good song. He followed up with another good song, then another one, and that was pretty much the way the whole evening went.

What initially started out as an "Ernest solo" evening, gradually grew into something bigger, with an equally increasing decibel level. First, Ernest was joined by Nicole, whose backup vocals sounded more soulful than her own opening set. Later in the show, Ernest invited drummer/percussionist Debra Dobkin and upright bassist Mark "Pocket" Goldberg to join him on stage. Their percussive presence made an immediate impact and those were the moments I probably enjoyed the most. Soon thereafter, Ernest "went electric", but not before having to overcome a few technical hiccups involving pedals, amps and plugs. The ensuing moments of interruption were handled with great humor by sound engineer Wayne Griffith, Ernest himself and the audience.

For the grand finale, the band grew by yet two more souls, namely Johnny Hawthorn and Laurie LeGore. They sounded fabulous together. 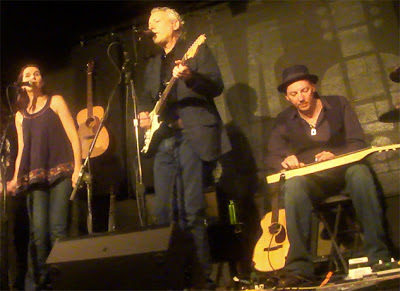 Picking favorite songs is no easy feat, considering the consistently high level of Ernest's songwriting. I loved "Close" with its clever lyrics, "Travellin" Shoes" and its moving story, "O Love" and practically everything else I heard.


A final thought: exactly one year ago, I had no clue who Ernest Troost was. I went to see him for the first time in January 2012, mostly because I needed a McCabe's fix. I did get my fix, plus I discovered an exceptionally talented artist, someone who since then has given me many hours of listening pleasure. Shaking hands with Ernest after his Sunday night show and having the opportunity to tell him how much I loved his music was a great ending to an equally great evening. 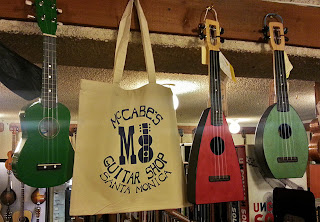