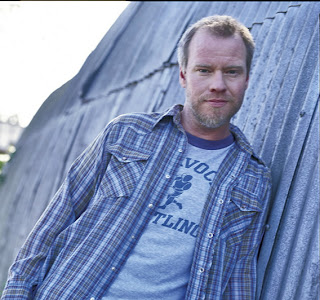 Every so often I go to a concert not knowing what to expect, mostly because of my not having done my homework. Case in point: Shawn Mullins. Like most everybody else, I became aware of Shawn in the late nineties, when his breakthrough hit "Lullaby" was all over the radio. I liked the song, but for reasons unexplained, I never got deeper into his music. I guess I thought of him as just another musician who had a good song but not much else. Boy, was I wrong, and it took me more than a decade to find out.

In my eyes, anyone who's booked to play McCabe's gets an instant credibility bump. At only twenty bucks a ticket, seeing Shawn was not an expensive proposition, so I bought myself a ticket. While waiting in line to get in, I met Charlie and Marsha, a couple who flew in from Arizona just to see Shawn's concert. We had a nice long chat, but when asked about my favorite Shawn Mullins song, all I could do was mention "Lullaby", before pleading ignorance about everything else.

The show started with an opening set by Max Gomez, a friend and musical collaborator of the headliner. Typically I write about opening acts at the end of my blog entries, but for Max I'll make a rare, but well-deserved exception. His forty-five minute set was thoroughly entertaining from start to finish. He can sing, he can write and yes, he can play the guitar. Has a nice personality, too. I assume he wrote most of the songs, except of course for the set-opening "Key To The Highway", the classic blues number. My favorites were "Ball And Chain" and "Run From You", two songs that sound exceptionally good in a live setting. In a classy gesture of support, Shawn Mullins joined Max for the singing of "Never Say Never". Later in the show, Jeff Trott took the stage to provide mandolin accompaniment on one of Max's songs. After I got home, I googled Jeff and found some interesting things about him (http://www.allmusic.com/artist/jeff-trott-mn0000814242)


Shawn's set was one of the best I've ever seen at McCabe's, bar none. No YouTube video and no studio recording come even close to conveying what Shawn brings to the stage. As the consummate live performer that he is, Shawn shines in every category: songwriting, singing, lyrics, guitar playing, personality, intensity, sense of humor and last, but certainly not least, humility.

I was truly taken by Shawn's soulful and relentlessly intense set. Most performers slow down a couple of times during their performance in order to rest their vocal cords, but not Shawn. Last night at McCabe's, he just went on and on, delivering one great song after another, with sweat running down his face and giving it all he had. Very impressive.

Shawn came out with a two-man band that included Davis Causey on electric guitar and bassist Tom Ryan. I liked Tom's playing and strong backup vocals, but Davis was just out of this world. To these eyes and ears, Davis was the embodiment of the perfect support musician, fully capable of shining on his own, taking a few moments to strut his stuff, but doing it always in a tasteful and understated way that wasn't meant to outshine the main act. His guitar playing was superb, so no wonder that many of the evening's spontaneous rounds of applause came in direct response to his solos and I really enjoyed observing the appreciative look on his face. I've seen this formula before - the combination of a lead singer who picks and strums an acoustic guitar while being accompanied by an accomplished electric guitar player works for me every time.

Returning the favor, Max Gomez came back to sing two songs with Shawn and the second one they sang together, "Love Will Find A Way", was an absolute gem.

Here are some of the songs I liked the most: "Catoosa County", "California", "Cold Black Heart", "Ghost Of Johnny Cash", "Beautiful Wreck", "The House Of The Rising Sun", but then again, there were no weak songs last night at McCabe's.

All-in-all, I had a heck of a good time last night at McCabe's. I showed up hoping to be pleasantly surprised at best, but Shawn's performance did a lot more than just surprise me: he surpassed my most optimistic expectations by a landslide. 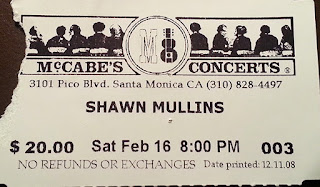