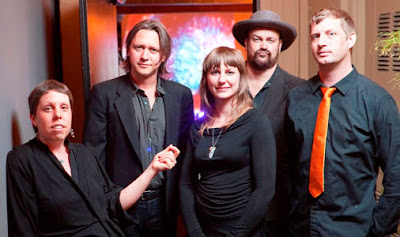 The Black Prairie is an ensemble that marches in its own yet-to-be-named musical direction. I have seen other acts who "do their own thing", away from well-established genres, but in terms of blazing new musical trails, no one impressed me as much as the Black Prairie. Any attempt to classify their music would be an utter exercise in futility, as there is no name for their blend of experimental bluegrass, Balkan-folk, tango, gypsy music, alt-country, old-time music, klezmer, modern jazz, folk-rock, ragtime, avant-garde Americana, polka and God knows what else.

Terms such as "experimental" and "avant-garde" are quite often associated with music that I find unlistenable, yet everything the Black Prairie played last night at McCabe's sounded refreshing and decidedly tuneful. With their humor, youthful energy and mostly with their music, they took me and everyone else for an unusual yet thoroughly rewarding ride.


The concert had plenty of highlights. I loved the all-instrumental numbers, which showcased exceptionally well the band's talent and eclecticism. My vote for the best instrumental number must go to "Dirty River Stomp", a gem of a piece with an obsessively gorgeous melody line. But I also enjoyed Annalisa's vocals - "Little Songbird", "Nowhere, Massachusetts" and especially "Lay Me Down In Tennessee" were all great.


I liked the fact that, as a band, the Black Prairie does not have any individual stars. Most of the time they played together as a true band, without flashy protracted solos, the kind that typically generate applause directed at one of the musicians, as opposed to the whole group. Last night, the band also used a few unusual instruments, which was certainly in line with the innovative spirit of their music. Jenny Conlee's contribution to the overall sound of the band cannot be overstated - her accordion sounded great to these ears.

The evening kicked off with a five-song set delivered by Ashleigh Flynn, a singer-songwriter of some talent. Accompanying herself on acoustic guitar and mouth harmonica, Ashley performed her first two songs solo, before being joined by some members of the headlining band. By the time her set ended, Ashleigh was flanked  by the entire band, in a truly nice show of support. The highlight of the opening set was "How The West Was Won". 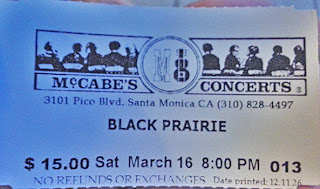