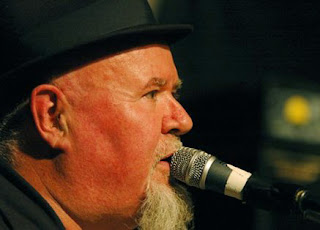 My first concert in the new year turned out to be a good one. Playing without a set list in front of a sellout crowd, Gene Taylor and his band put on an entertaining show that did not lack in the energy nor in the decibel departments.

Fans of the Blasters will immediately recognize the decades-long association between these four musicians, and it was precisely that long history of playing together that enabled them to deliver a tight set with minimal rehearsal time - "we rehearsed for minutes", Dave actually quipped with a dead-pan look on his face.

For me, the highlights of the concert were the band's extended instrumental parts, particularly Dave's electric guitar solos and Gene's boogie-woogie style playing. Dave's guitar on Earl Hooker's "Earl's Rhumba" was absolutely superb.

Gene handled most of the vocals, with Dave taking over the singing duties on a couple of songs, among them Johnny Guitar Watson's very listenable "Gangster Of Love". I also liked Gene's delivery on "Rainin' In My Heart" and "Jambalaya", two classic songs from the repertoires of  Slim Harpo and Fats Domino, respectively.

Last night was my twentieth time to see Dave Alvin live, either as a headliner, band member or someone's guest. He seems to be the kind of artist who gets better with age, so I'm sure that my current Dave-count is not nearly final.

Clocking in at about seventy-five minutes, the band's set was not particularly long, but with the stage chatter kept down to a minimum, we got to hear plenty of music and as a result, I went home happy. By the way, the band came back for a second show at 10 PM. 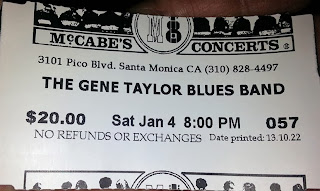