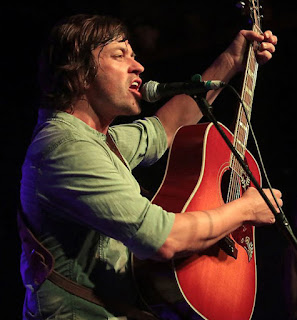 This was Rhett Miller's first-ever gig at the famous McCabe's Guitar Shop in Santa Monica. It was also my first time to see Rhett in action, at any venue. Things did not start well for me - his first few songs did not connect with me at all. There was nothing wrong with Rhett's intensity and pace, but it appeared to me that there were some irreconcilable differences between his melodic sense and mine - the gap was so big that I started contemplating an early exit, something that rarely crosses my mind at McCabe's. Needless to say, I did not leave and little by little, things started to get better for me - about thirty minutes into the show, Rhett started to win me over not only with his diabolical pace, boundless energy and pleasant personality, but also with songs that started to sound better and better to these ears, as the show progressed.

Rhett was not particularly talkative, although he did squeeze in a few stories that typically involved persons of the female persuasion. His concert can be summed up as a fast-paced race with the goal of performing as many songs as possible, even if it meant starting a new number while the crowd was still applauding the previous one. Clearly, Rhett was not saving his energy for the late show and he must be commended for that.

I suppose we heard nothing but self-penned songs, with one notable exception, Tom Petty's "American Girl", which turned out to be the evening's only song I knew. After only one listen, three numbers caught my ears and, with Google's help, I was able to find their titles: "Most In The Summertime", "Barrier Reef" and "Open Road", the latter two being the undisputed highlights of the evening.

I can't say that I went home as a totally satisfied customer. It is true, I did get introduced to a dynamic performer whose live show had good moments, but the bottom line is that one listen just wasn't enough for most of his songs to knock me out. Having said that, I have no choice but admit that the ball is in my court: I must give Rhett Miller's music more attention than I did in the past. 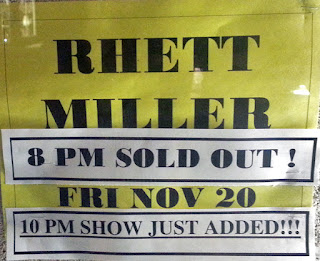