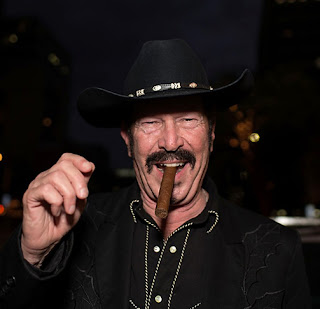 As far as I'm concerned, there's no such thing as overdosing on Kinky Friedman. Last night was my fourth time to see the Kinkster live and, even though he did recycle some of his older lines, the whole evening delighted me at least as much as it did ten years ago at the Skirball Center, when I first saw him in a live performance. I just can't get enough of his songs, humor, personality and stage presence - heck, I even love it when he reads out loud from his books, something I typically have no patience for.

Introduced as the "Governor of the Heart of Texas", Kinky took the stage dressed in his trademark black outfit, complete with a cowboy hat and a large cigar which remained unlit throughout the show. Performing without a predetermined set list, Kinky kicked off the proceedings with Woody Guthrie's "Pretty Boy Floyd", followed by a mish-mash of covers and self-penned songs intertwined with multiple humorous stories and jokes delivered in his inimitable style, with little regard to political correctness. At the respectable age of seventy-one, Kinky is still fully capable to entertain on multiple levels, music being just one of them.

As I expected, Kinky had a few unannounced guests, and I got super-excited when Mojo Nixon took the stage. Mojo's "Elvis Is Everywhere" is one of my favorite songs from the eighties, but sadly, he went for "Tie My Pecker To My Leg", a song that has little in common with good taste.


Just before Kinky came out, singer-songwriter-producer Brian Molnar delivered an impressive short set of his own that ended with a rousing rendition of Hank Williams' "Wait For The Light To Shine".

The evening was kicked off by Michael Simmons, Kinky's old friend and collaborator, who sang three songs. The one I liked the best was "I Guess I'll Smoke Another Cigarette". Don Heffington kept the beat throughout Michael's set.

Providing support to Kinky, Brian and Michael, guitarist Joe Cirotti impressed me quite a bit with his exquisite playing. Particularly impressive was his role as Kinky's accompanist toward the end of the evening.

The often-seen Van Dyke Parks popped in for some piano playing, including a solo playing of "Yellow Rose Of Texas". The crowd gave him a loud welcome.

Overall, I had a heck of a good time with Kinky and his guests and I'm pretty sure I will catch him again before too long. 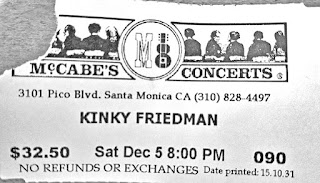