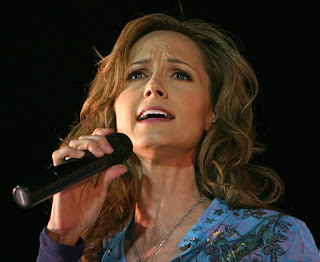 I'm not a regular follower of the contemporary country music scene, but I just wasn't going to pass up on the opportunity to see a singer of Chely Wright's caliber perform on the small stage of my favorite venue. So I went.

A few days have passed since the concert and there's one thought I just can't shake off: Chely stayed on the stage for about one hour and forty-five minutes, which may sound like a decently long set, but sang only ten songs. Using an estimate of five minutes per song, I figured that we were treated to roughly fifty minutes of music and a whopping fifty-five minutes of spoken word and that's just the wrong proportion for an event that was supposed to be about music. Funny thing, though: Chely may have been overly verbose, but I found most of her storytelling quite compelling.

Courtesy of Wayne Griffith, the concert venue's long-serving sound engineer, I was afforded the rare opportunity to witness a complete soundcheck and that was something truly special. As it turned out, a lot of hard work went into getting the sound just right, but in the end the thumbs-up signal was flashed by all involved. There was nothing divalike in Chely's demeanor throughout the soundcheck, then as she left the stage, she turned to Wayne and uttered an emphatic "Thank you, Sir". That was classy.

I liked Chely's singing - her voice was crystal-clear and she hit all her notes with feeling and precision. Her set list included numbers from "I Am The Rain", her latest album, as well some of her "oldies", among which I really liked "Something Positive And Hopeful". To me at least, the evening's highlight was "My Sister", a song with a somewhat unusual history. After I got home, I googled the song and here's what I found, reproduced here in Chely's own words: "This is a song that I recorded at Sunset Sounds that I did not include on the album. I am offering it as an exclusive download to my Kickstarter supporters. I'm proud to say that I co-wrote 'My Sister' with Diane Tinelli and she was one of the backers who bought the Kickstarter co-writing session reward."

Another highlight was Chely's rendition of Bob Dylan's "Tomorrow Is A Long Time", which I think was the evening's only cover.

Throughout the concert, Chely was accompanied by guitarist Jeremy Lister, who also sang backup vocals. Their acoustic, stripped-down arrangements appealed to me a lot more than the overproduced sound of today's commercial country music.

Overall, I did not regret my decision to attend the concert, which had high points (primarily Chely's voice) but also a few lows (too much talk, not enough music). 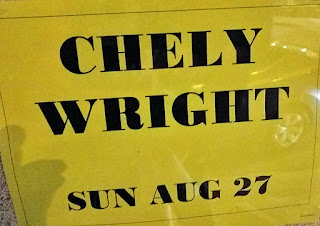 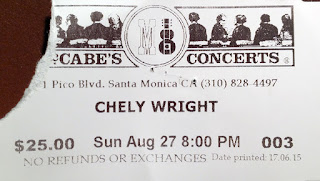