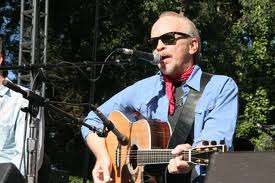 This was the second of the three Peter Case benefit concerts held at McCabe's on three consecutive evenings, and it turned out to be the least memorable of the three. Tickets cost $50, the most I had paid for a McCabe's concert. Steve A. and Steve M, a.k.a. "The Other Steve", were there with me, it's always fun when we get together.


LIST OF PERFORMERS
Stan Ridgway
Michelle Shocked
Ron Franklin
Syd Straw
The Dark Bob
Amy Farris
Jack Rudy
Chris Morris (the host of the evening)
The show started with a pointless schtick by someone calling himself "The Dark Bob". It's the only part of the evening that's available on YouTube. You may wanna watch it here:


After he performed "On My Way Downtown", a song written by Peter Case, Dave Alvin spoke about the days when the two of them were with their respective bands, the Blasters and the Plimsouls.
Ron Franklin played a short set that was rather dull, then Stan Ridgway and Michelle Shocked brought some life into the show.


The late Amy Farris accompanied Dave during his set - it was the last time I saw Amy, who later that year committed suicide.