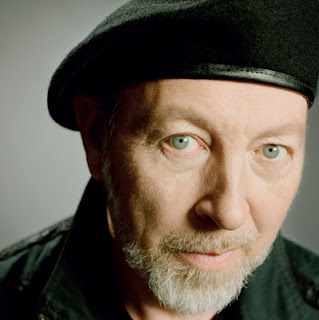 This was the second and final Richard Thompson benefit concert organized at McCabe's in response to the Japanese earthquake and tsunami disaster. The concert sold out in seven minutes, a new record for McCabe's, and unlike three weeks ago, their server did not crash.

The show was announced for 8 PM. Wanting to sit in the front row, I got to McCabe's at 5:15 PM, which was good enough to be third in line - it was reassuring to know that there are at least two people in the Universe who are crazier than me.

The show was opened by Jim Kweskin, who - at the tender age of seventy - grabbed and kept everyone's attention with a thirty-five-minute set that was a lesson in how to warm up a crowd: not exceedingly long, with a good mix of songs and informative chatter in-between songs. Jim was accompanied by bassist David Jackson and Padrick Peper on mouth harmonica.

Richard Thompson came out just before 9 PM and played a revamped set of decent length that had only five songs from his May 7 appearance. Throughout the show, he appeared to be relaxed and in good mood. His guitar work was strong, and so was his voice. Longtime collaborator Debra Dobkin, an often-seen percussionist, was in the room, so Richard jokingly acknowledged her presence by asking her to applaud rhythmically and percuss.

Clearly honored by the presence of Jim Kweskin, who stayed on after his opening set, Richard called himself a fan and owner of early Jim Kweskin Jug Band albums, back in the 1960s. Richard then sang "Drinkin' Wine Spo-Dee-O-Dee", an uptempo song first recorded by Stick McGhee. Later in the show, Richard spoke lovingly of Sandy Denny, then followed up with his own rendition of "Who Knows Where The Time Goes", a gorgeous song written and sung by Sandy during her Fairport Convention days.


At the end of his set, Richard received a standing ovation, after which he came back with his youngest son, bassist Jack Thompson, with whom he played the last three songs from the above list. Particularly good was the extended finale of "Back Street Slide", which pretty much followed the original version. Jack, sporting two metal rings in his lower lip and long hair that often covered his entire face, held his own under intimidating circumstances.
My jaw dropped when not one, but two folks standing in line, right next to me, had hard copies or my previous Richard Thompson concert review, taken from this very blog. Now I know - I have a readership of at least two! Thanks Lynne and thanks Mike!
Posted by Gabe at 8:03 PM