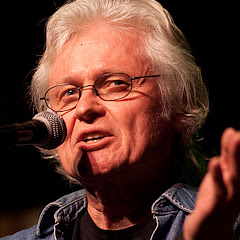 Chip Taylor is a class act. What makes me say that? Well, a classy musician would meet his fans before the show and shake a few hands. Chip Taylor did that. A class act would introduce his band before they played a single note. Chip did that, too. There.

Once again, Chip Taylor put on an outstanding show, with humor and great songs, new and old, and lots of captivating stories, mostly from his younger days. Yes, he did drop more than just a handful of names, but not in a self-aggrandizing way. Carole King, Gerry Goffin, Chet Atkins, Merle Haggard and even my beloved Bert Kaempfert got mentioned, but the night belonged to "Rock and Roll Joe", the generic name given by John Platania and Chip Taylor to the "unsung heroes of rock n' roll", the musicians whose guitar licks and drum beats have been heard by zillions, but remained anonymous behind the superstars they were supporting.

The bare-bone concert announcement posted in the window at McCabe's gave no clue as to the massive talent that was about to take the stage inside. Chip came out with John Platania, best known as Van Morrison's longest serving guitarist, bassist Tony Mercadante and - huge surprise !! - the young and gifted Kendel Carson. John, Kendel and Chip had just released their latest collaboration, an album titled "Rock And Roll Joe", so appropriately, they went on to play the album in its entirety. Except for "I Can't Let Go", the old Hollies hit from the 1960s, the album featured all new material, written primarily by John, Kendel and Chip. The whole thing sounded good from start to finish.

With the new album behind them, it was time for Chip's biggest hits, "Angel Of The Morning" and "Wild Thing", played in quick succession, followed by Chip's more recent "Charcoal Sky". Next, Kendel took center stage (not literally) to perform "Ten Lost Men" and "Oh Baby Lie Down", both from "Alright Dynamite", her second album. The show ended with Chip's "I Wasn't Born In Tennessee".

The highlight of the show? Hard to tell. Maybe Kendel's beautiful voice. Or John's guitar playing. Or Chip's songs. Or all of the above.

After the show, I had once again the pleasure of shaking hands and chatting for a minute or two with Chip Taylor, who, stunningly, remembered me from over a year ago. Wow. 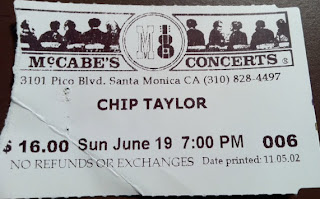