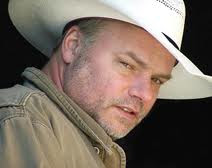 When McCabe's announces new shows, I usually know right away whether I'm interested or not. But there are quite a few instances when I debate within myself for weeks before I decide what to do. Fred Eaglesmith's concert was a good example of the latter and in his case, the decision was to go. It turned out it was a good decision.

Only superficially familiar with his music, I didn't know what to expect. I could have been in for a long night of monotonous songs delivered with an eyebrow-raising voice, but somewhat surprisingly, Fred grabbed me from the get go with his songs and humor and kept me engaged until the lights went on.

I can't name any of the songs he played that night, but his chatter and utter self-confidence are hard to forget and his music was good, too. I liked his live performance a lot more than his studio recordings that I had sampled in the days before the concert. So I definitely got my money's worth, but was he good enough to make we want to drive 102 miles to see him once again at McCabe's in faraway Santa Monica? I think he was.

The concert was opened by singer-songwriter-producer-instrumentalist Marvin Etzioni, a.k.a. the Mandolin Man. His set was OK, but not huge.