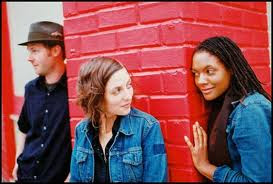 Claremont's Folk Music Center is a fun music store and occasional concert venue, founded decades ago by Ben Harper's grandparents. Today, the store is owned by Ben Harper himself, and as far as I know, is operated by Ben's family. The place is not big - there's a small stage in one corner and there's just enough room for seventy-five folding chairs, which in essence defines the Folk Music Center's problem: they cannot generate enough money to attract the caliber of artists who usually perform at McCabe's Guitar Shop in Santa Monica.

Better known in their native Canada than in the States and with nothing but local advertising, Po' Girl still managed to sell out their Claremont gig and I don't think anyone went home unhappy. I know I didn't. Singers Allison Russell and Awna Teixeira took turns at singing lead, they harmonized, played a variety of instruments and told a few good stories. They sang mostly in English, but they threw in a French song or two. I liked very much the sound of Allison's clarinet, an instrument one seldom hears at folks music concerts, and was amazed by Awna's gutbucket bass, an instrument I had not seen before, nor since. The highlight of the show was "'Til It's Gone", a catchy tune with beautiful lyrics.

All in all, Po' Girl proved to be a highly likeable group that certainly deserves to play in front of larger audiences. I seldom buy CDs anymore, but when I do, I buy directly from the artist. Before going home, I picked up Po' Girl's "Deer In The Night" album, released just a few months before the concert I attended.


Here's a video that captures Allison and Awna at their contagious best:

One final note: concert tickets cost only $12 ... I pay more for parking when I go to larger venues ... 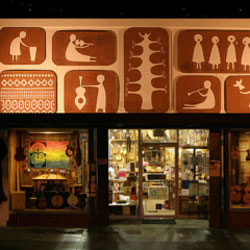