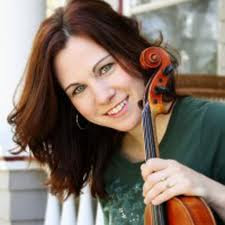 I decided to catch April Verch's show at McCabe's after having seen a few of her intriguing videos on YouTube. She hails from Canada. She sings. She plays the fiddle. She step dances. And she can do all of them at the same time. Clearly, this young lady is talented. Very talented.

Accompanied by her husband and percussionist Marc Bru, April played, sang and danced her heart out. At first, her show was both captivating and entertaining, but after forty-five minutes or so, her act became "more of the same" and when the concert was finally over, I went home with a slight sense of unfulfilled expectations. I wouldn't mind seeing her again as an opening act, but not as a headliner.

And speaking of opening acts: the proceedings were kicked off by American singer-songwriter Brad Colerick, who managed to impress me quite a bit. His songs were great, without exception, and I loved his voice and delivery. What a surprise!

His best song, I thought, was "Juarez". Here's a live rendition of the song: