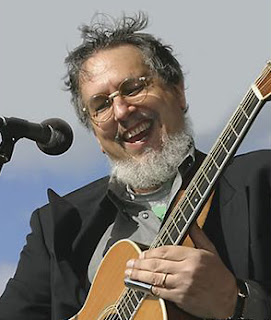 For my 600th concert, I couldn't have asked to see a better performance than the one put on by David Bromberg last night at McCabe's, but I have to admit that, although fully aware of his place in the music world, I had only been a part-time follower of David's career. Shame on me.

Last night's show at McCabe's, the second of two sold-out shows there, was nothing short of extraordinary - no wonder David was given four standing ovations, including one right in the middle of his second set, as he was wrapping up "Mr. Bojangles".

Any attempt on my part to describe David Bromberg's wit, charisma, musical credibility and, pardon my French, joie de vivre, would be an exercise in futility, so let me just say that the guy is witty and charismatic like few others, makes you take in every word he says and the joy of playing music just oozes through his pores.

And the music he played was great. Last night it was mostly blues, but not only. The proceedings kicked-off with "Keep On Drinkin'", followed by a few songs from "Use Me", David's brand new album of musical collaborations with some of the biggest names in the music business. John Hiatt's "Ride On Out A Ways" and Tim O'Brien's "Blue Is Fallin'" were exceptionally good, but the song that made me scream the loudest was "Diggin' In The Deep Blue Sea", written by Keb' Mo' and performed brilliantly by David and his band. And Keb' Mo' deserves all the credit in the world for having come up with such a perfect song title.

And speaking of the band: they were great as well, particularly Brian Mitchell, who played the piano and keyboards with total fervor and abandonment. He also picked up his accordion to provide the Latin touch for "The Long Goodbye", David's collaboration with Los Lobos. Brian's many extended solos were very well received by the crowd.

One of the highlights of the evening was David's rendition of "Bring It With You When You Come", an old jug band tune, complete with racy lyrics such as "I ain't no plumber, I ain't no plumber's son, But I can screw your pipes until your plumber comes", and if that wasn't racy enough for you, he went on with "I ain't no lawyer, I ain't no lawyer's son, But I can get you off until your lawyer comes". The crowd loved it, needless to say. But David saved the best for last, by seamlessly transitioning into a folk-music version of "Wooly Bully", with full vocal support from the audience. It was a blast.

Then there was humor. Lots of humor. At one point, David asked the band "What do we play now? Oh, let's play a blues number in A-minor", and they all started playing a song. The same song. Earlier in the evening, just before the intermission, David told the crowd that they have CDs for sale. And DVDs. Also BVDs. I also enjoyed David's story about Sam Lightnin' Hopkins' way of making cash by recording the same few songs at multiple record labels without signed contracts, which would have limited his money-making options.

And there were more outstanding songs: "Diamond Lil", "Rock & Roll Millionaire", "Kind Hearted Woman", from Robert Johnson's repertoire, Vince Gill's "Lookout Mountain Girl", and the unbelievable "I Will Never Be Your Fool". I've been to a few concerts in my life, but I don't think I've ever seen or heard anything quite like the latter.

David Bromberg - what a performer! 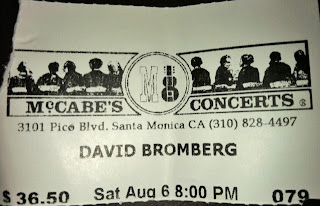