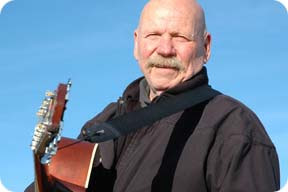 This was my third time to catch Barry McGuire in concert in just about two years, which clearly demonstrates how much I enjoyed his "Trippin' The Sixties" series of concerts. But there was something different about this third show: Terry Talbott, Barry's long-time musical collaborator, was no longer there. I don't know what led to the breakup, but in the end I was a lot happier with Barry's new partner, John York, a musician associated with one of the early incarnations of the Byrds.

Well into his seventies, Barry showed no signs of slowing down. His seemingly bottomless energy and the tremendous joy radiating from his face are hard to forget. It was very obvious that Barry loved being up there on the stage and when he thanked the fans for their support, his words did not sound fake at all.

I was very impressed with Barry's voice, which remained as instantly recognizable as it was during his "Eve Of Destruction" days. The concert started with "Green, Green", the classic New Christy Minstrels tune featuring Barry's raspy voice, and after that, it was one gem after another, all interspersed with stories about Bob Dylan, Mama Cass, Tim Hardin, the Lovin' Spoonful and others. And you can bet your life that no one questioned his credibility. He was there!

I went to the show with my childhood friend Mircea, who happens to be a walking encyclopedia of music of all genres, if there ever was one. We both loved the show.

John York was exceptionally good in his new role as Barry's sidekick. Unlike the somewhat overbearing Terry Talbot, Barry's previous partner, John was a perfect complement to the headlining Barry, always offering his musical skills to support, rather than upstage.

The highlight of the show had to be "Eve Of Destruction", a song that still gives me the goosebumps. "I I Were A Carpenter", "Hair" and "Greenback Dollar" were also outstanding, but then so was the entire show.

I consider myself extremely lucky for having had the chance to not only see one of my life-long heroes, but also talk with him. As he often does, Barry made himself available after the show to meet his fans, so I got to shake his hand once again. Barry also autographed for me a photograph taken in December 2007 after his show in Altadena, here it is: