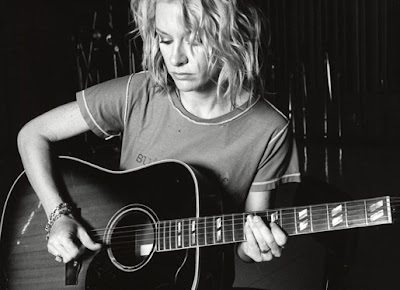 This was the first of her two sold-out shows at McCabe's, but this time - unlike in July 2010 - there was no Val McCallum to accompany her. Yes, I did miss Val's devilishly good guitar playing, but other than that, Shelby's solo performance was near-perfect and - had she included just one song from her Dusty Springfield tribute album - I would have written "absolutely perfect".

Shelby's focus was on "Revelation Road", her newly released album. Using two acoustic guitars and never sitting down, she sang each and every song from the album - you may say that's a lot of new songs delivered in quick succession, but no one had a problem with that - the songs were all good.

Shelby's voice is a separate chapter in itself. I can't think of any other singer who can match the purity and sweetness of her voice. I particularly love the goosebumps-producing lower half of her vocal range.

The crowd laughed out loud when, a couple of times during the show, Shelby talked about her somewhat dysfunctional family and how that benefited her songwriting.

Surprisingly, Shelby had her own personal roadie who popped in every time she switched guitars ... roadies handling acoustic guitars ... now that's something you don't often see at McCabe's! There were three cameramen as well, so one fine day we may get to see the whole show on DVD, that would be nice.

After the new album was out of the way, it was time for a bunch of Shelby's better known songs. The crowd's best response came after her stellar delivery of "Old Dog", "Leavin'" and "Where I'm From", which lead to two well-deserved standing ovations. 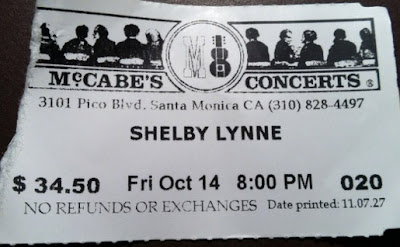