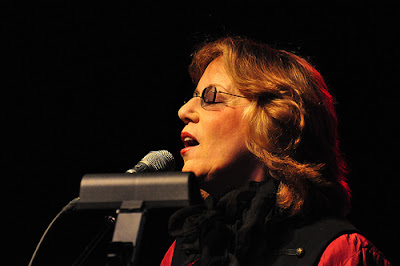 This was the second of Jennifer's three sold-out appearances at McCabe's that took place during the months of September and October, 2011.

In many respects, the second show closely followed the first one, not necessarily a bad thing. Jennifer came out with guitarist Billy Watts and bassist Taras Prodaniuk, the same two outstanding musicians she had been touring with in recent weeks and months. After the intermission, they were joined by Rick Cunha, who kept a low profile while aptly playing his string instruments.

There were practically no changes in the set list, with one welcome exception: the show ended with a great rendition of "Song Of Bernadette", with lyrics by Leonard Cohen and music by Jennifer Warnes herself.

McCabe's is a truly intimate venue that quite often induces performers to be entirely themselves, as opposed to just acting in a scripted and rehearsed spectacle. From the very get-go, Jennifer was in a giggly mood and, before too long, everyone else, Taras and Billy included, were giggling along. Jennifer also happened to be in a "Googly" mood, as she made frequent references to her passion for looking things up on the Internet, pretty much like most of us. Throughout the show, I felt like being in someone's living room and that's a feeling one gets at McCabe's more often than anywhere else.

With songs written by Mickey Newbury, Bob Dylan, Leonard Cohen, Ian Tyson, Allen Toussaint, Susan Tedeschi and Buffy Sainte-Marie, among others, there were no throwaways in Jennifer's set. And speaking of Susan Tedeschi: just like in her September show, Jennifer pronounced Susan's distinctly Italian last name as if it were German. In Italian, Tedeschi is pronounced "Tedeski", a fact I was able to verify via Susan's own Facebook page. And here's the punch line: coincidentally, "Tedeschi" means "Germans" in Italian, and I'm not kidding.

The best songs of the evening were, once again, "It's Raining" and "Ain't No Cure For Love". Leonard Cohen's "Night Comes On" was great, too. Jennifer's singing remains top-notch and so is her entire stage presence. Having the opportunity to see her up-close at McCabe's remains a special treat for me. Will she ever be back there? I sure hope so.