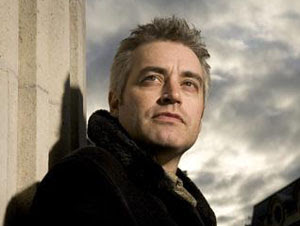 This was my seventh time to see John Wesley Harding in concert, starting with my first concert ever at McCabe's, in June 1990. At that time, he was one of my favorite singer-songwriters, thanks to his incredibly good first two albums. Since then, my interest in Wes' music has been an up and down affair, mostly down, but definitely up again in recent years. 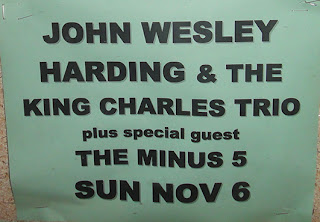 The concert announcement showed two bands, the Minus 5 and a certain King Charles Trio, which in the end turned out to be the very same group of outstanding musicians, namely:

I laughed out loud when Wes announced the King Charles Trio, only to see six musicians take the stage. I was extremely impressed with the four Decemberists, who are a band in the true sense of the word: all solid players, without being flashy, no showboating solos, just great teamwork from start to finish. I'd love to see them again, preferably at McCabe's

The concert kicked off with the Minus 5 (everyone minus Wes). They played three songs that grabbed me from the get go. Vocalist and guitarist Scott McCaughey and drummer John Moen were in a cheerful mood and so was the rest of the band. Then Wes joined the band, which only added to the humorous tone of the evening. From that point on, the main emphasis was on Wes' just-released new album, "The Sound Of His Own Voice", a highly listenable piece of work. The numbers I liked the best were "There's A Starbucks Where The Starbucks Used To Be" and "Sing Your Own Song".

Wes did not sing a single number from his first two albums, but he did do "If You Have Ghosts", the Roky Erickson song that he recorded in the early 1990s. I did miss "Cathy's New Clown" and "The Devil In Me", but the songs from the new album sounded just as great - in his third decade of releasing music, Wes remains one heck of a songwriter and with a voice that's as strong as ever, he's doing fine in the vocal department as well.

Scott McCaughey made a strong impression on me and I really liked his "Aw Shit Man" song. Now that I know who Scott is, I will start digging up his earlier work.

Playing his guitar and mandolin, Peter Buck kept a low profile throughout the evening. He never soloed and there was no way of telling that he had been part of a band once considered to be America's best.


In spite of everyone's advice, I once again sat in the front row, where they say you never get the best sound, certainly not when you sit directly in front of a fat drum set. Yet I was amazed by the quality of the sound and the perfect balance between voices and instruments.