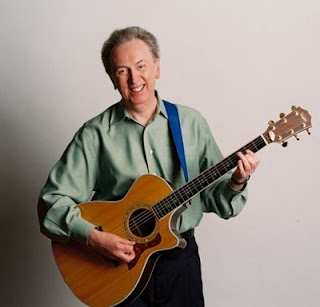 This was my sixth time to see Al Stewart and he's still on my "Must be seen again" list. It all started exactly twenty years ago, when I went to McCabe's with my teenaged niece not because I thought much of Al, but only because there was nothing better being offered at McCabe's during her visit. As it turned out, the concert was a total knock-out. Al came out with Peter White and together they just blew me away.

Twenty years on, the self-proclaimed "King of Historical Folk Rock" is still a highly entertaining artist whose shows combine great songs, stellar guitar playing, good humor and British-accented intellectual talk, all delivered in a relaxed manner, without any pretensions. At 66, his voice is pretty much unchanged and so are his idiosyncratic vocal inflections. Everything about Al screams experience and professionalism and overall, I just can't think of an artist who's more likeable than he is.

In terms of guitar playing, Al is essentially a strummer, with rare and rather brief incursions into finger picking, so to a huge extent, his shows rely on the support he gets from guitar virtuosos such as Peter White and Laurence Juber. Trouble is, these folks have their own careers, so they are seldom available to play, let alone tour, with Al.

Enter Dave Nachmanoff, a lesser known guitar player, who in 2004 made me frown in disappointment when he was announced as Al Stewart's new accompanist. Dave was certainly good enough then, but at that time I could not have imagined what a phenomenally great guitar player he would soon become. Last night at McCabe's, Dave's intros, solos and outros were nothing short of masterful, to such an extent that he made me stop wishing for Peter or Laurence, and that's no small feat. And he's got humor, too, thus perfectly complementing the equally jocular Al.


Last night, Al and Dave came out with a predetermined set list, but they did take a few requests and initiated a few digressions of their own, such as "Running Man", from Al's "24 Carrots" album.

As always, "On The Border" was among the concert highlights, and so were "A Child's View Of The Eisenhower Years" and "Night Train To Munich". I also liked "Flying Sorcery", a song that appears as "Flying Sauce" on Al's set list.

While playing the most recognizable riff from Henry Mancini's "Theme From Peter Gunn", Al talked briefly about Duane Eddy, one of his early influences.


Part-time bassist Mike Lindauer provided a few moments of levity, as he was coming and going without fully knowing when exactly he was needed to be there - this actually fit quite well with the loose tone of the show.

Dave Nachmanoff was given the opportunity to showcase some of his own songs, among which "Sheila Won't Be Coming Home", with some lyrics by Al Stewart, was the best.

John Wicks, formerly of the Records, took the stage a couple of times to provide backup vocals, then together with Al and Dave, sang his own hit "Starry Eyes". 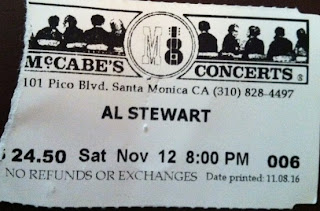