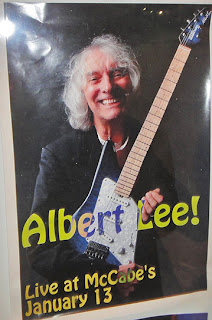 After a long wait of twenty years or so, I finally had my chance to see someone I truly admired, the great Albert Lee, the devilishly great guitarist I first became aware of two decades ago on Mark O'Connor's "The American Music Shop". So there I was, sitting in the front row, dead center, I could have almost touched my hero, but instead of loving every minute of the show, I was unhappy.

A music-stand and a huge Korg synthesizer stood between my eyes and Albert's guitar and hands. For the entire duration of the show, Albert played either fully or partially hidden behind those things. That was disappointing. After all, I waited in line for close to two hours so that I could sit up-close and watch Albert's finger work. Here's a photo that shows what I mean:


OK, so a humongous synthesizer blocked the view of some of the spectators. That would have been tolerable had someone actually played the darn thing. But no - the Korg just sat there unused until late in the show, when Albert accompanied himself on keyboards for the playing of two ballads.

But enough venting. There were plenty of positives to talk about, which I recognized even while being unhappy. Albert is a guitarist like few others. His blistering solos were something to behold. And he can sing, too. While on CD he sounds like an OK singer, I was surprised about how good a singer he actually is. Clearly, he is getting better with age, and that is quite a compliment, considering that Albert has been on the road for fifty-two years, as he told us last night.

Albert may hail from Great Britain, but his set consisted almost exclusively of older American songs, originally recorded by the likes of Fats Domino, Gram Parsons, Emmylou Harris, Ray Charles, Carl Perkins, the Everly Brothers, Little Feat, Rodney Crowell and others. In that sense, Albert reminds me a bit of Dave Edmunds, another British guitar wizard with somewhat similar musical interests. To me, the best songs were John Stewart's "Runaway Train", Ray Charles' "Leave My Woman Alone" and "Spellbound".
The final song of Albert's set was "Country Boy", a number that I've heard many times over the years without knowing who penned the song. Now I know - Albert himself is one of the co-writers! Here's a high definition YouTube clip showing Albert's outstanding treatment of "Country Boy":


Alexandra Lee, Albert's singing daughter, took the stage to perform Emmylou Harris' "Luxury Liner" and Gram Parsons' "She". No doubt, Alexandra can sing, but she appeared exceedingly nervous up there on the stage.

Albert Lee came out with Will McGregor (bass), JT Thomas (keys) and Jason Smith (drums) - they played well together in spite of having had only one rehearsal under their belt. Albert told us that the band had showed up late, so they had no time for a proper pre-show sound check. The first song of the evening, Fats Domino's "I'm Ready", served as the de-facto sound check: it did not sound good when it started, but by the time it ended, everything was in good balance.

Musically speaking, the show was exceptionally good, yet I went home with a sense of disappointment. I did get to see Albert Lee in concert, that was great, but the overall experience could have been better. Five of my regular concert-going friends were in the room - although seated in different areas, they all had some trouble seeing Albert's guitar and fingers. We all hope and pray for Albert Lee's return to McCabe's, sometime soon, with nothing placed between him and his fans. 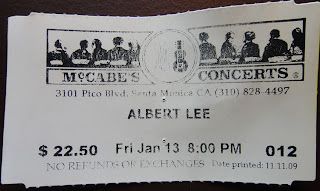