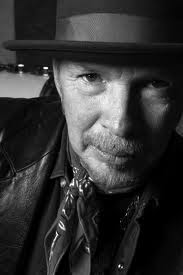 Even after having seen Dave Alvin many, many times, I still can't resist the temptation of buying myself a ticket to see him yet again, especially when McCabe's is the venue. This happens in spite of my knowing precisely what to expect from Dave.

Last night at McCabe's I got exactly what I expected. Dave played for an hour and fifteen minutes, which is pretty much the norm when there is a 10 PM late show as well. OK, so the set wasn't a super-long one, but the song selection was top-notch.

Carrying an acoustic guitar in one hand and a bottle of Bud Light in the other, Dave came out dressed in a black suit, white shirt, cowboy hat and his trademark scarf around his neck. He kicked off the proceedings with a great acoustic version of "Ashgrove", one of my favorites.

After his third solo song, Dave brought out Chris Miller, his long time musical partner and member of the Guilty Men. Chris and his Telecaster were great additions to the show - I enjoyed very much the interplay between the two guitars. Chris' solos were all low key, thus perfectly complementing Dave's sound.

There wasn't much chatter between songs, but there was some and it was all funny and informative. Dave spoke and sang lovingly about three of his departed musician friends - Amy Farris, Chris Gaffney and Bill Morissey. I have seen Dave perform together with Amy and Chris more than once, so I'm aware of their closeness. "Black Rose Of Texas" and "Run Conejo Run", the songs written by Dave for Amy and Chris, respectively, were some of the best of the concert. The first of last night's two-song encore was Bill Morissey's "Inside", the show's only song not written or co-written by Dave.

Dave Alvin remains one of my favorite singer-songwriters. I've been seeing him regularly since 1990 and I can state with 100% certainty that today he sounds better than ever and likewise, his songwriting is stronger than ever. Just my opinion. 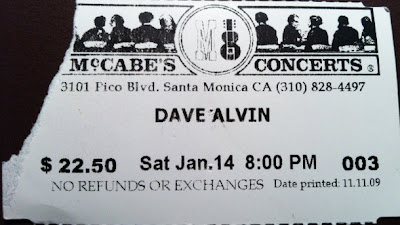