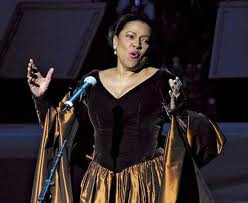 Last October, while surfing the net in search of a Christmas present for my Better Half, I got really excited when I discovered "An Evening of Spirituals with Kathleen Battle", a concert that I knew she would enjoy very much. I managed to secure two decent seats in row EE, the fifth row from the stage ... or so I thought. When we walked in, we could not believe our good luck: the stage had been built out into the seating area, at the expense of the first four rows, so in actuality, row EE was the front row!


My own expectations from the event were high - I've always liked gospel music and negro spirituals, but have seldom experienced these genres in a live setting. The concert started with pianist Cyrus Chestnut's solo delivery of "Tribulations", a hard-to-categorize piece of music that sounded dissonant at times, with the Albert McNeil Jubilee Singers humming in the background. Then Kathleen came onstage and, without acknowledging the cheering crowd, launched into "Lord, How Come Me Here".

Surprisingly, there were no microphones anywhere on the stage. From our front row seats, we had no problems hearing the voices and the piano, but Royce Hall is not a small house and I'm not sure whether the folks in the back got their money's worth in terms of the sound.

The songs just kept coming, but something wasn't right up there on the stage - everyone seemed to be uptight and I could sense tension in the air. There wasn't a lot of interaction between Kathleen and the choir and that meant a few lost opportunities - her a cappella rendition of "Wade In The Water" wasn't bad, but it could have been far more powerful had the choir joined in. Then there were a few awkward instances when Kathleen walked off stage for a minute or so, with Cyrus and the choir just sitting there in silence, seemingly not knowing what to do.

Things improved significantly after the break. Everyone appeared to be more relaxed, there were more smiles on the stage, the tempo of the songs picked up a bit and - at long last - I started to feel the music. There was more interaction between Kathleen and the choir and those were the best moments of the concert. Kathleen sang with power and precision and the crowd responded accordingly. I liked her voice and singing technique, everything she did was fine, but I missed the feeling of rawness I often hear in gospel music. Well, that's to be expected from a classically trained operatic voice.

THE SET LIST
Lord, How Come Me Here
Go Down Moses
Wade In The Water
Couldn’t Hear Nobody Pray
Give Me Jesus
Roll, Jordan, Roll
I’ve Been ‘Buked An’ I’ve Been Scorned
Over My Head
Swing Low, Sweet Chariot
Ride Up In The Chariot
Wasn’t That A Mighty Day
Steal Away
Plenty Good Room
I Don’t Feel No Way Tired
Hold On
Were You There?
Fix Me Jesus
Balm In Gilead
Dontcha Let Nobody Turn You ‘Round
Let Us Break Bread Together
He’s Got The Whole World In His Hand
Every Time I Feel The Spirit


I would have loved to hear more from the Jubilee Singers - their sound was a lot closer to the traditional gospel music that I like so much. I also enjoyed watching their faces and body language, as they were responding not only to Kathleen's singing but also to Cyrus Chestnut's unique style of playing the piano.


The songs I liked the best were "Fix Me Jesus" and "He's Got The Whole World In His Hand", a song that got everyone on their feet. Kathleen's one-song encore, "Evey Time I Feel The Spirit" was great, too. The concert ended with two prolonged standing ovations and few clapped louder than me. It's true, it wasn't a perfect concert, a few things could have been better, but the entire evening was truly special and just like everybody else there. I knew that I was in the presence of greatness. 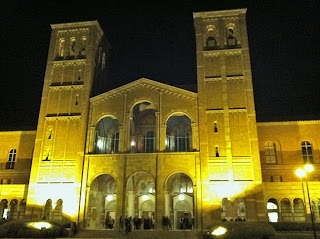