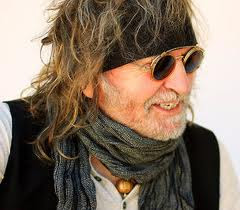 I do occasionally listen to Ray Wylie Hubbard's music, but I can't say that he's on my power rotation - I like his albums, but one good listen is enough for a while. His live shows, on the other hand, are a different story altogether and it's much more than just the promise of getting to see some unannounced high-caliber  guests, as was the case a few years back with Chris Robinson of the Black Crowes.

This was my third time to see Ray in concert and let me start by saying that there were no famous guests this time around. Yet the concert was so good that it made me seriously contemplate staying for the late show as well, which I ended up not doing.

Ray came out with drummer and percussionist Rick Richards, bassist George Reiff and a young guitarist who turned out to be Ray's son, Lucas. The latter surprised me very much. The sounds of his electric guitar dominated the evening, a welcome departure from the exclusively acoustic character of Ray's earlier shows at McCabe's. Although only eighteen, young Lucas can play. I liked his bluesy sound, but he can rock and can play classic country as well.

Ray's sense of humor and the way he delivers his stories are an integral part of the "Ray Wylie Hubbard Package" - my friend Steve put it best: "I could sit here and listen to his stories for hours". But the main attraction was Ray's music, a good mix of old and new material, all sung with his unmistakable voice that's still going strong.


Canadian up-and-comer Brandy Zdan sat in to sing backup vocals for just one song, so I could not form an opinion. She looked great, though.

All-in-all, it was a fabulous evening with a true treasure of the American music scene. I will definitely catch him again. 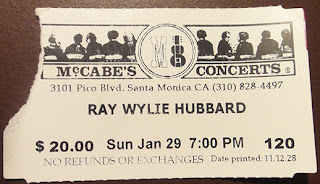