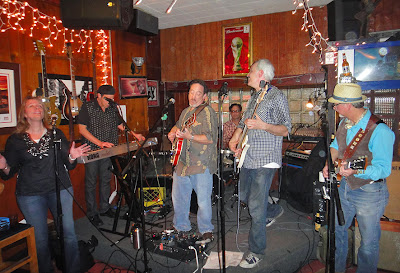 Only in LA. Where else would you have an internationally known musician join an amateur band, sing with them for almost a full hour in front of no more than fifty people and have fun in the process, too? As I said, the answer is: Only in LA. In this case, the amateur band was the Shills, while the internationally known musician was none other than the lovely Susanna Hoffs of the Bangles.

Calling the Shills "an amateur band" requires a clarification before I go any further. Amateur could mean "lacking the skill of a professional". That description does not apply to the Shills. Amateur could also mean "being engaged in an art form as a pastime, rather than as a profession" and that is precisely the case with the Shills.

I went to the Cinema Bar immediately after the Jackshit concert at McCabe's, where Susanna Hoffs made an unannounced appearance that got us all excited. Normally I go straight home after a concert, but with my Better Half out of town, I decided to show my support for Lincoln Myerson's band, the Shills. Lincoln, as you may know, is the Concert Director at McCabe's Guitar Shop, the best concert venue in the Universe.

The Shills are a cover band that draws from at least three decades of music, starting with the sixties. Individually and collectively, they sound quite good. The fact that they have more than just one vocalist is one of their strengths and so is their repertoire, which mixes well-known songs with obscure ones. Overall, I found the band to be listenable and entertaining.

A few songs into the second set of the Shills, in walked Susanna Hoffs and a gentleman, possibly her manager. Our jaws dropped. A few minutes later she joined the band and stayed up there on the stage for the next fifty minutes or so. She sang the lead vocals on Lulu's "To Sir With Love" and Linda Ronstadt's "Different Drum", both were great. With nothing prearranged, everything had to be improvised right there on the spot - Lincoln and Bradley would suggest songs, then Susanna would say whether she preferred singing, playing the guitar or just shaking her tambourine. There was lots of laughter on the stage and the crowd had fun, too.

After Susanna Hoffs left the venue, the band went on for a few more songs, then they called it a day. It was way past midnight, but no one cared - we had just witnessed something truly rare, something that could not have happened without the love of music of all involved.

Email ThisBlogThis!Share to TwitterShare to FacebookShare to Pinterest
Labels: Shills (The), Susanna Hoffs