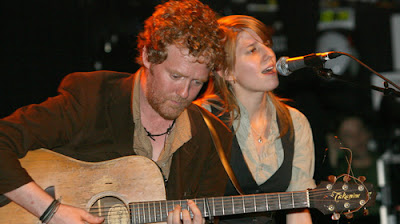 In an earlier blog entry, published after I first saw the Swell Season at McCabe's two years ago, I wrote "Would I ever have the good fortune of seeing them again at McCabe's? Unlikely". I was wrong. Last Sunday, I once again held in my hand a ticket that had the words "The Swell Season" written on it. My Lucky Stars, if you are reading this: Thank you, thank you, thank you!


The concert started with a hilarious reversal of roles: Glen went straight to the piano, while Marketa, carrying Glen's beat-up guitar, planted herself at center stage, before launching into "I Have Loved You Wrong". The second song of the set, "Low Rising", had the two protagonists returned to their usual routines. The timbre of Glen's voice, as well as his vocal inflections sounded just like on the studio version, it was uncanny, but then, toward the end of the song, Glen asked the crowd to sing along and that took away a bit from the spell I was under. By the way, he sang the "Sexual Healing" version, if you know what I mean.


I absolutely loved Glen's passionate voice on "When Your Mind's Made Up" and "Say It To Me Now", two amazing songs that I can't imagine being sung by anyone but Glen. Marketa interjected herself with a few delicate ballads delivered with her soft voice, but with a lot more confidence than two years ago.

At one point, midway through the show, Glen invited Shane Walsh, an aspiring Irish singer-songwriter, to come up on the stage and sing "Kissing", one of Shane's songs. It wasn't bad. Glen and Marketa received additional support from Aida Shahghasemi, an Iranian-born musician who played an old Persian percussion instrument called daf. She made a good impression on me and the crowd loved her as well.
As always, the Swell Season played a few covers. Their epic rendition of Van Morrison's "Into The Mystic" and the equally epic "Fogtown", the old Michelle Shocked tune, were the best. Bruce Springsteen's "Drive All Night" was good, too. Here are Glen and Marketa delivering "Fogtown" at McCabe's, with Yours Truly sitting literally at their feet:


The show was a reunion of sorts for Glen and Marketa, who had not played together in many months. Having had no time to rehearse or even come up with a set list, they pretty much winged the whole show and they winged it great. I enjoyed observing the ad-hoc song selection process, as Glen was throwing titles around, in expectation of Marketa's acceptance.

The final song of the evening, an old Irish tune called "The Parting Glass", was yet another highlight of a concert that in essence consisted of nothing but highlights.

There are no words to describe the emotions triggered by Glen and Marketa's music. The juxtaposition of their diametrically opposed voices, facial expressions and temperaments produce amazing results. They write songs of the highest quality. Their humility is visible from a mile, a clear sign that their well-deserved success did not go to their heads. I hope and pray that I'll get to see them again one day.


P.S. The link below will take you to someone else's blog. Go ahead and click - you will land on a page that covers this very same concert, but from a radically different angle. I read the page and my heart broke. 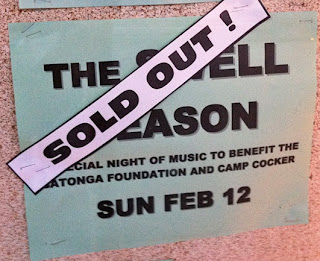