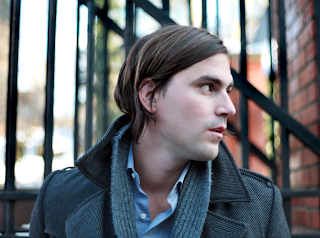 Here's yet another example of a great singer-songwriter whose music I would have probably never heard, had it not been for McCabe's, the venue that, at least to me, lends instant musical credibility to anyone who's booked to play there.

In Diego Garcia's case, I bought my ticket after having spent no more than ten minutes researching his music on YouTube. At the same time, I sent out email alerts to a few of my concert-going friends and one of them, Steve, took heed. We sat together in the front row and when I got home after the show, I had a message from Steve in my inbox, with these words: "Good call on this guy. Glad I checked him out". A second email received this morning from the same Steve ended with "Geez what a nice show last night". So I'm not alone in having lingering good vibes about Diego's performance. Almost a full day afer the concert, last night's sights and sounds are still in my brain and it looks like they'll stay there for a while. Not that it bothers me.

Diego came out with two musicians whom I had not seen before, cellist Daniel Bensi and Argentinian guitarist Zeke Zima, and what an awesome trio they were. I especially loved the totally authentic sounds of Zeke's Spanish guitar, but Daniel's free-style approach to playing the cello was fun, too. And it was heartwarming to see the repeated signs of respect and appreciation shown by Diego, the headliner, to the musicians who were there in his support.


Daniel and Zeke were great, but the undisputed star of the show was Diego Garcia and his music. Starting with the gorgeous "You Were Never There", Diego delivered most of the songs from "Laura", his first album, among them "Stay", "Separate Lives", "Inside My Heart", "All Eyes On You" as well as the title track. They all sounded at least as good as their studio versions. I'm not even going to try to pick a "highlight of the show", as consistency was the name of the game, as in "consistently great", with no low points whatsoever.

From the repertoire of his earlier band, Elefant (spelled with an "f"), Diego sang "Misfit" and "Bokkie". I liked both songs, especially the latter. There were also two well-chosen covers: "This Strange Effect", an exceptionally obscure song from the catalog of the Kinks, and Neil Young's "Harvest Moon".

Diego is tall, lean, definitely good looking, and he knows it. Late in the show, he jumped off the stage and gave big hugs to four or five highly cooperative ladies. Was it a bit cheesy? I didn't think so, my impression was that the hugs were his way of thanking his primarily female audience for their support. Before climbing back on the stage, Diego shook hands with one male member of the crowd, namely me, probably in appreciation of my solidly enthusiastic response to his music. I did not say anything, but gave him an approving head nod, which Diego reciprocated. Nice.

Diego is one heck of an entertainer. He's got it all: the songwriting talent, the voice, the looks, the humor, the charm, the power of hooking you and keeping you hooked to his world, the ability of appealing to all genders and ages. Success will follow him, I'm sure.


I've always been a sucker for precisely the kind of music Diego does so well, so I will continue to follow his career. His popularity will undoubtedly grow and I don't believe I will ever get the chance to see him again at the intimate McCabe's. 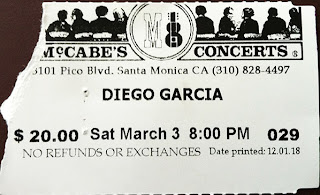