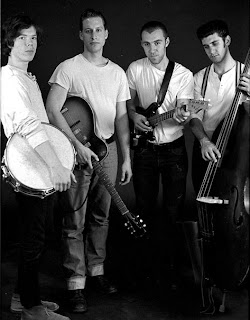 I first saw the Americans in October 2010, when they opened for the Secret Sisters at McCabe's - they impressed me quite a bit, so a couple of months ago, when they were booked to headline at McCabe's, I was one of the first ticket buyers. A few weeks later and totally against my initial prediction, the show sold out.

For those wondering about the origin of the band's moniker: The Americans hail from the United States of America, America for short, a country located on the North-American continent and inhabited by Americans. That's precisely the same country that has given us the Five Americans ("Western Union"), the American Breed ("Bend Me, Shape Me"), Jay & The Americans ("Come A Little Bit Closer") and, of course, America ("A Horse With No Name", "Ventura Highway", etc, etc.). Seriously now, the fact that such an obvious name was still available for the band to pick up and use just boggles my mind. Good for them!

Upon entering the concert room, we found on our seats a printed set list, something one does not often see. Included were not only the song titles, but also some additional information about the songs that comprised the first half of the concert. Here's the list: 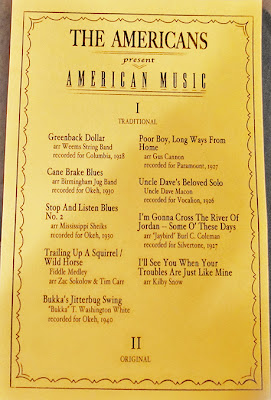 Wearing suits and carrying acoustic instruments, the Americans remained seated throughout their first set, which was a bit unexpected from a band known for playing mostly high-energy rockabilly. The whole thing can be described as interesting, different, definitely well-done, but not pulse-raising. Two songs stood out: Zac Sokolow's fiddle medley, with Tim Carr drumming on the strings of Zac's fiddle, and "Uncle Dave's Beloved Solo", showcasing Zac's exquisite banjo playing.


After a short break, the four Americans came back dressed in white T-shirts, ready to rock. And rock they did. With their acoustic instruments mostly out of the way, they played loud and fast. My favorites were "Mannie" and "Prison Yard Walk", two of their own songs.

Patrick Ferris is one heck of a musician - his voice is a deadly weapon, made precisely for the kind of music the band likes to play. With his looks, delivery and guitar playing, he would be perfect in the movie role of a rocker from the late fifties and early sixties. Zac Sokolow impressed me as well - I enjoyed watching him switch from one instrument to another and I found myself focusing often on his guitar licks. The rhythm section was great, too. I liked Tim's one-handed drumming, while the other hand kept busy with a shaker. Jake sounded exactly the way a rockabilly bassist is supposed to sound and, what's more, he also looks the part.


The band's best moments came when they rocked the hardest and played the loudest. A few of the songs they played at McCabe's are now available for your viewing pleasure on YouTube:

Sadly though, I could not enjoy the show to its fullest, as I was constantly being distracted by two overzealous young ladies who, I suppose on behalf of the band, were recording the show. Their constant movement and incessant clicking of their SLR camera annoyed me quite a bit, so by the time the show ended, all I wanted to do is get out of there, which I did. It would have been nice for me to hang around, shake hands with the four Americans and thank them for their outstanding music. 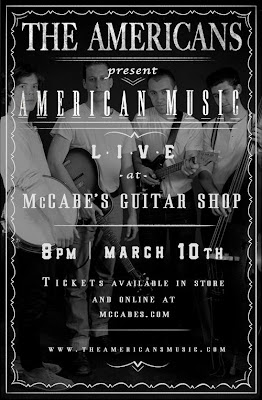 Email ThisBlogThis!Share to TwitterShare to FacebookShare to Pinterest
Labels: Americans (The)