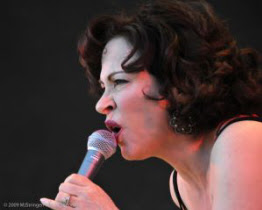 This was my fifth time to see Janiva Magness at McCabe's in less than four years, a clear sign that I'm a fan. I can't say that she is a "typical McCabe's act", she is definitely not, but that only adds to her attraction - the power of Janiva's voice and strength of her electric band are a refreshing counterpoint to the acoustic guitars I often see in action there.

Janiva's live shows follow the same formula every time, so no surprises there. First the band comes out to warm up the crowd with two uptempo blues numbers. After the second song, an awe-struck Zach Zunis, Janiva's long-time guitarist, takes the microphone to announce Janiva's latest awards and accomplishments. Then Janiva takes the stage and delivers her first set. A twenty-minute intermission allows the musicians to mingle with the crowd, mostly around the merchandise table. Then the same crowd takes their seats for the second set. The band returns to the stage and delivers two more great instrumentals, with Janiva still out of sight. Now it's time to bring her out - assuming that there are new folks within the audience, which is never the case at McCabe's, Zach Zunis once again yells out Janiva's awards. Janiva comes back for her second set, during which she proudly announces her age. Finally, an encore, then we all go home.

Janiva is a great performer, but her concerts just wouldn't be the same without the outstanding musicians she brings along. Here's the line-up of her current band:

Individually and collectively, these guys were great. The four songs they played without Janiva were definitely some of the best of the evening.

The first set consisted mostly of songs from "Stronger For It", her brand new album. I liked the new material, there weren't any weak songs there. The best numbers, I thought, were "I Won't Cry" and "Make It Rain".

With most of the new material out of the way, Janiva's second set featured a few songs from "The Devil Is An Angel Too", among them "Walkin' In The Sun", "Slipped, Tripped And Fell In Love", "I'm Gonna Tear Your Playhouse Down", Nina Simone's "I'm Feelin' Good" as well as the title track.

One of the highlights of the second set was Janiva's delivery of  "Ragged Company", a song from her new album. Simply outstanding. And no Janiva Magness concert would be complete without Delbert McClinton's "You Were Never Mine", which came with a few slight detours from her earlier renditions of the song.


Janiva looked and sounded as good as ever. Age does not seem to affect her, not in the least. Her voice is something to behold and, year after year, she comes up with new material that is strong and seemingly custom-made for her. My personal preference is for the slower numbers in the vein of "You Were Never Mine", but she is equally good when it comes to belting it out. Needless to say, I'll be there the next time Janiva's in town.

During her encore, Janiva acknowledged the presence in the room of Ann The Raven, a public radio personality who has been delighting me with her late evening blues shows for many years. The lights went on for a few seconds, so I had the pleasure of seeing Ann for the first time. 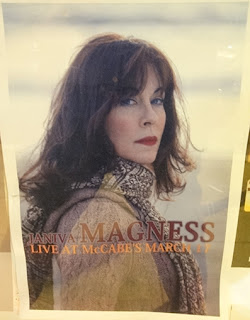