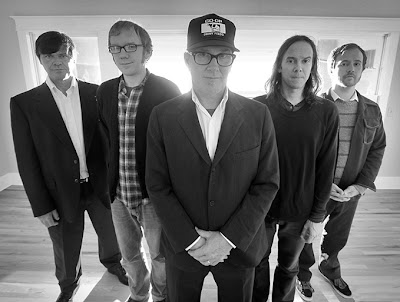 Last night's Lambchop concert at McCabe's was one of the most polarizing musical events I have ever witnessed. I was there with a few friends. One of them left midway through the show, later telling me that he had attended livelier funerals in his life. Another friend was so mesmerized by the beauty of the music that he decided to catch the late show as well. One concert, two diametrically opposed responses. Go figure. Where do I stand on this? In the middle, that's where.

Indeed, the music was beautiful. It was also well sung and well played. But the concert lacked two important elements: variety and energy. Yes, the songs were good, but most of them were of the same style and same slow tempo, so I could understand someone losing interest after a while. The show could have benefited from a few moments of musical levity, but there weren't any. It would have probably helped if I knew the songs, but that wasn't the case - I had managed to give "Mr. M", Lambchop's latest album, only one good listen, while driving to the venue. At no time during the concert did I feel like leaving, but after a few songs I was craving for something louder and faster, that's for sure.

As far as I could tell, they played only two songs not written by Kurt Wagner, Lambchop's unmistakeable leader: a Billy Joe Shaver tune (title?) and Bob Dylan's "I Threw It All Away". The other songs came from "Mr. M" and I must say it again: most of the songs, individually taken, were good - it was the totality of them that turned some folks off.

I enjoyed keeping an eye on the members of the band and what struck me was the absence of any eye contact between them. None of them were in a chatty mood, they just  played and played, and what came out sounded great. I liked Scott's drumming - he certainly had the hardware to make a huge racket, but instead, played gently, in an understated way. Tony Crow's piano playing was very good, too.

Kurt wasn't in a talkative mood himself. He addressed the crowd only toward the end of the show, when he introduced the band. I'm a huge fan of McCabe's, so it felt good hearing Kurt referring to the venue as a "sweet room".

I went home not overly happy, nor unhappy. I will most likely not catch them again live, but I will continue checking them out on YouTube, in search of something more lively, something more energetic. 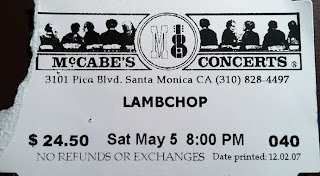