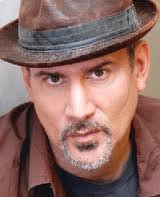 This was my twenty-second encounter with Peter Himmelman, an artist who has affected me more than most anyone else. Nineteen years have passed since I first saw him at McCabe's and I still can't stay away from his appearances there. Nor can I stop "spreading the word" - turning friends on to Peter's music remains something I still love doing - this time I talked two of my McCabe's friends, Paul and Steve, into seeing Peter for the first time and, long story short, Peter has two new fans.

Peter is in his low fifties now - his live show is not very different from what I saw in the 90s, but there are a few subtle changes. The improvisations are still there, albeit in smaller amounts. The humor is as good as ever and he still sprinkles his show with various accents, whether US regional or foreign - these amuse me a lot. Overall, there is less interaction with the crowd.

Being in Peter's band is no easy thing - if you are not 100% alert, if you allow your mind to wander away for just a split second, you will be left behind by Peter's frequent and mostly sudden changes of style, pace, or both. With the greatest of ease, Peter can blend rock, western swing, reggae, R&B and who knows what else in a single song - such musical adventures have always been a fun part of Peter's live performances.

Gone are the casual clothes and black bandanas Peter wore on stage during the 90s. For last Sunday's appearance, Peter came out wearing a suit, tie and a hat. Was he comfortable playing rock & roll dressed up like that? I know I wouldn't be.

Once again, Peter's band included drummer Andy Kamman and bassist Al Wolovitch - hard to believe, but the three of them have been playing together since their high school days. They were joined on stage by guitarist Greg Herzenach, yet another long-time collaborator of Peter's, and Israeli keyboardist Daniel K. Man. What resulted was an almost-entirely electric concert, a welcome departure from what I expected to be a mostly acoustic affair.

There were a few songs I did not know, but I did get to hear plenty of old favorites, among them "Impermanent Things", "Mission Of My Soul", "Tremble", "Phone Call From Chicago", "Eleventh Confession", "One Shot At Love", "Seven Circles", and "Been Set Free". Most of these songs are not easy to sing - Peter's frequent strained facial expressions are much more than just a measure of his intensity and I found myself wondering whether ten years from now he would still be singing songs as difficult as "Seven Circles".

After having seen Peter so many times, I don't believe he will ever surprise me with anything new or different, yet I remain solidly under his musical spell. In other words, I'll be back for more. 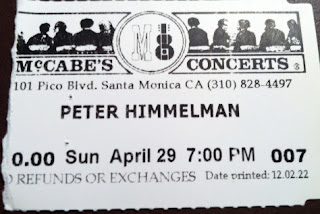