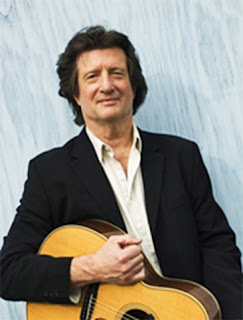 It's hard to describe what makes me want to catch Chris Smither in concert almost every time he's in town. Save for his new material, Chris' shows are pretty much the same. It's always just him. No unannounced guests, ever. No band, either. Always plays sitting down, with a piece of plywood under his feet and a microphone strategically placed a few inches above the plywood. Invariably delivers the same kind of self-deprecating humor that quite often involves his relationship with the other gender. Everything about a Chris Smither live appearance is predictable and, time and time again, all predictions materialize.

Yet there is an invisible force out there that makes me steer my car precisely to where Chris is scheduled to appear. Seeing Chris in concert may have become a routine thing for me, but it's yet to become a drag.

Friday night at McCabe's, Chris focused primarily on his new album, titled "Hundred Dollar Valentine". The new songs were "vintage Chris Smither", which is just another way of saying that his songwriting has not deteriorated with the passage of time. I liked all the new songs, but still, I found more pleasure in the songs I knew, especially the topical "Surprise, Surprise", "Origin Of Species" and "I Don't Know", a funny song written about the inquisitive mind of his adopted daughter. Dave Carter's "Crocodile Man" sounded great and so did Chris' own "Lola" and "No Love Today". There were no Bob Dylan covers, and that's just a statement, not a negative.

Chris was in good vocal form. His guitar playing was exquisite, but then again, it always is. I will never get tired of watching his fingers at work and the way they produce that inimitable vibrato sound that I can instantly recognize as his and only his.

The 8:00 PM concert was a sell out, so a late show was added. This resulted in a slightly abbreviated first set, not too bad. For his one-song encore, Chris chose to play "I'll Be Home Soon".
Before going home, I bought his latest two releases, the aforementioned "Hundred Dollar Valentine" and an all-covers six-song EP titled "What I Learned In School". I listened to the latter while driving home, so the good vibes of the show stayed with me a little longer.

It's true, Chris Smither's concerts are predictable, but his formula works every time to my full satisfaction. I'm pretty sure this wasn't my last time to see him perform live.