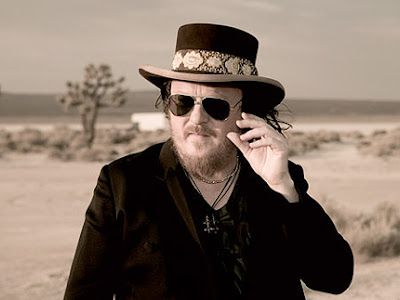 If you're like me, then your roots are in Europe and you're absolutely crazy about Zucchero, the Italian megastar who conquered the entire Planet Earth, with one notable exception. Yes, you guessed it just right, the exception is the United States, a country that, musically speaking, is pretty much isolated from the non-English speaking world and that's both good and bad news.

The bad news is that most Americans will never get to know the many immensely talented artists who are household names elsewhere. The good news is that devout fans like myself have a chance to catch their idols in more intimate venues, something that would be impossible to do in Europe. Zucchero, for instance, plays the Royal Albert Hall when in London, but when he crosses the Atlantic, you are more likely to catch him at the House Of Blues on Sunset Boulevard, a place where I had the good fortune of attending not fewer than four of his West Coast concerts.


The Zucchero concerts I have attended over the years
Ironically, the first time I heard Zucchero sing was on American television, where he guested at one of Luciano Pavarotti's star-studded benefit concerts in the early 1990s. I wasn't particularly impressed, so I left him alone for a few years, until one day I saw his name in a list of upcoming HOB concerts. At that time I decided to dig a little deeper, so I got myself a used copy of Zucchero's then-current "Spirito DiVino" album. With monumental songs such as "Cosi Celeste", "X Colpa Di Chi" and "Il Volo", the album became an instant hit with me and, practically overnight, my passion for everything Zucchero went sky high.

If you want to be close to the stage at the House of Blues, all you have to do is get there when the doors open, plant yourself in front of the stage, stay there for two hours until the concert starts, then keep standing there until the curtains come down. That's not a customer-friendly formula, but it's not a big price to pay for the privilege of watching Zucchero in action from just a few steps away. 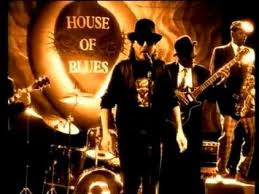 Some musicians affect me more than others, but few have hit me as hard as Zucchero. His live show is something to behold - he's a masterful performer, in constant touch with his audience, always intense, always radiating joy and always wearing one of his trademark hats.

Needless to say, someone of Zucchero's stature can assemble any back-up band he wants - this gave me the opportunity to watch a few world-class instrumentalists such as Americans David Sancious and Kat Dyson, as well as Italy's Mario Schiliro. I loved the way the band was able to reproduce with good accuracy the rich, multi-layered orchestrations of Zucchero's studio recordings.


The great Solomon Burke was Zucchero's unannounced guest in October 2007 at the House Of Blues. Surrounded by his entourage, King Solomon watched the show from the main floor, then at one point he took the stage, seated in a wheelchair, to sing "Diavolo In Me" with Zucchero and it was exhilarating.

In April 1996, Zucchero was joined on stage by Corrado Rustici, his brilliant producer. An accomplished guitarist, Corrado dazzled me with his funky guitar playing, as he was standing directly in front of me. Corrado is little known in the States, in spite of his impressive resume that includes collaborations with the likes of Elton John, Whitney Houston, Aretha Franklin, Andrea Bocelli, Sinead O'Connor, Eric Clapton and countless others.

For Zucchero's appearance at the Grove Of Anaheim in October 2007, I managed to grab two front row seats. The sound wasn't the best there, but being once again "right there" was priceless. Toward the end of the show, I stood up and advanced to the edge of the stage, along with other fans and that gave me the opportunity to shake hands with the master, then seconds later, exchange a high-five with him. Unforgettable!

Here's a partial list of the songs performed by Zucchero at the concerts I have attended:

Cosi Celeste
Madre Dolcissima
Diavolo In Me
Datemi Una Pompa
Il Volo
Pane E Sale
X Colpa Di Chi
Miserere
OLSMM
Cuba Libre
Nel Cosi Blu
Un Kilo
Music In Me
Rossa Mela Della Sera
Baila
Diamante
Senza Una Donna
Hai Scelto Me
Nice Che Dice
I'm fortunate for having discovered Zucchero, in spite of his lack of exposure to the general public here in the States. His music has given me countless hours of immense pleasure and if he ever comes back to these shores, you can bet your life I'll be there. 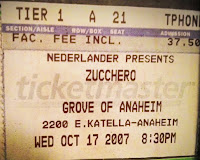