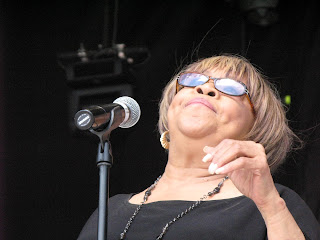 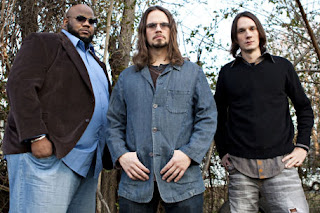 The Malibu Performing Arts Center is sixty-five miles away from my home. Getting there after work, on a weekday, is no easy feat, yet there I was to attend a concert that brought together two of my favorites, Mavis Staples and the North Mississippi All-Stars, plus veteran bluesman Charlie Musselwhite and someone who was new to me, Joe Krown. The gig was part of their Solid Blues Tour, with stops in multiple cities across the country.


The evening kicked off with an all-instrumental set delivered by New Orleans pianist Joe Krown, four songs in all, all very good. Then out came the heavy-hitters. First, the All-Stars played a mostly acoustic set that closed with an electric version of "Po' Black Maddie". I particularly liked their acoustic treatment of "Goin' Home, Part 1" and "Make Me Down A Pallet On Your Floor". Here's the set list of the All-Stars:

Ragged But Right
Mean Old World
Make Me Down A Pallet On Your Floor
The Dock Of The Bay
Will the Circle Be Unbroken?
Goin' Home, Part 1
Po' Black Maddie - Skinny Woman - Po' Black Maddie


After the intermission, the North Mississippi All-Stars took on a new role, that of a back-up band. First they played with Charlie Musselwhite, who was his usual self, telling stories, singing and playing his harmonica with competence. Then the band, which now included Charlie Musselwhite and Joe Krown as well, brought out Mavis to a rousing crowd reception. As expected, she sang "The Weight", a song that also appears in the repertoire of the All-Stars. "I'll Take You There" came complete with Mavis' moans and groans and lots of crowd participation. Joe's organ sounds were a welcome addition to the church-like fervor that Mavis brought to the show.

At the not-so-tender age of sixty-eight, Mavis was in good vocal form and one could easily tell how much she enjoyed performing for us.

Okay, so the music was great, but for me, the highlight of the evening was my getting to shake Mavis' hand. It was a spontaneous act made possible by my front-row-center seating. Toward the end of the show, when Mavis came real close to the front of the stage, I just reached out my hand, Mavis saw it and took it with a smile, while my starstruck self could only manage a timid "thank you". Unforgettable! 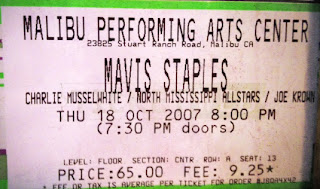