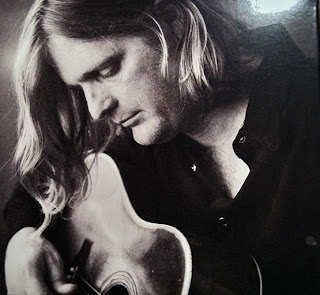 Last night I attended another one of those concerts that keep bringing me back to McCabe's time and time again. Guitarist extraordinaire Val McCallum, accompanied by a few friends, put on a fabulous two-hour-long show that was filled with lots of musical joy and laughter.

Last night, Val's guests were two singers whose voices have been heard by millions around the world, namely Jackson Browne and Colin Hay of Men At Work fame. The appearance of the former was somewhat predictable, but everyone in the room was thoroughly surprised when Val brought out Colin Hay. I myself was unaware of any earlier connection between the two.

The evening coincided with the release of "At The End Of The Day", Val's debut album. The concert kicked-off with Val singing the title song, the very same number he picked to end his first-ever solo show three months ago. The first song of the evening was also the only time we saw Val unaccompanied on the stage. First, he was joined by the lovely Cindy Wasserman for the singing of five slower songs of a personal nature, all taken from the new album. "Digging For Gold" and "Tokyo Girl" were my favorites. Jackson Browne dropped in to sing backup vocals on "Tokyo Girl", a song written by Val for Shelli, his wife of many years. The pace picked up considerably when Val swapped his acoustic guitar for an electric one to sing and play one of the album's strongest songs, "Ghost Town".

For years I had been fantasizing about seeing Colin Hay live at McCabe's, so I screamed with excitement when Val brought him out. Colin made us laugh with his unique sense of humor and his heavy Scottish accent only helped matters. Sadly, he only sang two songs, "Don't Wait Up", from his solo years, and "Overkill", the mega-hit from his days with Men At Work. Both songs were received very warmly by the crowd. Colin's easy-to-recognize voice was as strong as ever and his confident stage presence was a sight to see. Cecilia Noel, Colin's Peruvian wife, sang backup vocals on "Overkill".

The arrival of drummer Fritz Lewak and bassist Tyler Chester brought another jolt of energy to the stage, so by the time Jackson Browne took the stage, the place was ready to rock. Jackson sat down behind his keyboards and went on to deliver a good size set of six songs, all taken from his vast back catalog. "Rock Me On The Water", "The Pretender" and especially "Doctor My Eyes" were out of this world, with the band working as a well-oiled machine, playing loud and rocking the house with power and precision. Val McCallum's solos on electric guitar were some of the best I've ever heard at McCabe's or anywhere else, for that matter.

Jackson Browne's set benefited tremendously from the presence of his recent backup vocalists, Alethea Mills and Chavonne Stewart. I enjoyed very much watching their moves and I certainly liked their voices.

The concert continued with Val and Cindy Wasserman. They performed Val's own "Rarebird" and a few great covers, such as Neil Young's "Pocahontas" and John Doe's "Burning House Of Love". Again, Val's electric guitar took center stage with a few blistering solos.

For the encore, Val came out wearing a cowboy hat and talking pretty much like Beau Shit, his Cochtotan-based alter-ego. Together with Cindy and the band, he delivered a fast-paced version of "Wrecking Ball", a song I first heard with the Knitters a few years back.

All-in-all, it was a wonderful concert that offered quite a variety of musical styles, from slow ballads to fast and loud rock & roll. With so many great musicians coming and going, the show was thoroughly entertaining. Special kudos go to Val McCallum, a musician I learned of only in 2005, but who since then has given me tons of musical pleasures. 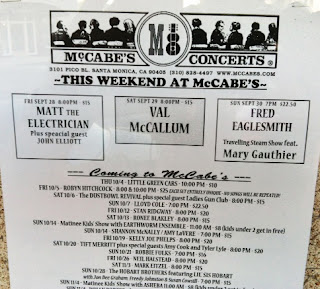