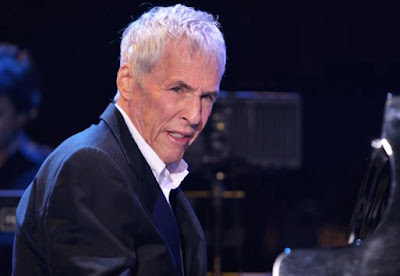 I get the goosebumps just thinking about Burt Bacharach's music. I was a teenager in the sixties, and while listening to what everybody else was listening to, I developed a special affinity for Burt's songs, regardless of who the interpreter was. Decades later, I'm still in awe of the depth and breadth of Burt's oeuvre and, quite often, I find myself listening to his songs, which I own plenty of.

In 1987 and then in 1998 I caught Burt in concert with Dionne Warwick and Elvis Costello, respectively. Both those concerts were amazingly good and left me wanting for more. A few years later I got more. A whole lot more:

I lucked out big time in February 2006, when an unexpected chain of events brought me two front row seats for Burt's concert at Orange County's monumental Segerstrom Hall. Accompanied by the Pacific Symphony Pops under the direction of Richard Kaufman, Burt delivered a "greatest hits" show that will be impossible to forget. Just as unforgettable were Burt's three vocalists, namely Josie James, John Pagano and Donna Taylor. Josie's grand finale on "Anyone Who Had A Heart" was a stunning tour-de-force, if there ever was one and John's vocals were just as impressive.

I'm extremely proud to say that I got to shake Burt Bacharach's hand. It happened toward the end of the concert when, spontaneously, I got up and reached out my hand toward Burt. He noticed me and took my hand with his two hands. Being in a state of near-paralysis, all I could muster were the words "Thank You". Burt then reciprocated with the very same words. Any doubt as to what constituted the highlight of the evening?

The power of a full symphony orchestra and Burt's own band and vocalists combined to amazing results. The sound of so many beloved tunes brought tears to my eyes a couple of times during the show. Burt dedicated about twenty minutes to his newer songs from his then-current album titled "At This Time". I liked his new material, especially "Where Did It Go".

In addition to playing the grand piano and doing some conducting, Burt also sang the lead vocal on a couple of songs, among them "Alfie". Though weakened a bit by age, his voice was instantly recognizable to all those who heard his recordings from the sixties and seventies.

In a welcome effort to play as many of his hits as possible, Burt packaged most songs in a few medleys and those were absolutely wonderful, as the musicians were sliding seamlessly from one great song to another.


PARTIAL SET LIST
What The World Needs Now
Don't Make Me Over
Walk On By
This Guy's In Love With You
I Say A Little Prayer
Trains, Boats And Planes
Wishin' And Hopin'
Always Something There To Remind Me
I'll Never Fall In Love Again
Only Love Can Break A Heart
Do You Know The Way To San Jose
Anyone Who Had A Heart
Make It Easy On Yourself
The Look Of Love
Arthur's Theme
The April Fools
What's New Pussycat
Raindrops Keep Fallin' On My Head
The Man Who Shot Liberty Valance
Wives And Lovers
Alfie
The Windows Of The World
That's What Friends Are For
Any Day Now
A House Is Not A Home
Go Ask Shakespeare
Where Did it Go?
Who Are These People?

Everything about the concert exuded class, from the majestic venue to the quality of the performance. My Better Half and I went home absolutely elated so no wonder that six months later I was once again in the audience to catch the master, this time at the Cerritos Center For The Performing Arts.

Except for the absence of a full symphony orchestra, the concert was nearly identical to the one at the Segerstrom Hall. I once again managed to shake Burt Bacharach's hand, in spite of my not having a front row seat. During the encore, while playing what I knew would be the closing song, I got up from my seat, made my way to the center aisle, walked up unchallenged to the stage for my second hand shake with Burt. What a fabulous moment!

Experiences like these had to be relived. In June 2007, my Better Half and I went to the Walt Disney Concert Hall in Downtown Los Angeles to catch essentially the same show in a world-class venue. This was our first time to attend a concert at the famed venue. Our seats weren't the best - we sat in a balcony on the right side of the stage, but not far from the stage. As far as our view was concerned, no complaints, but the sound was a different matter. I was dying to once again hear Josie James' thundering rendition of "Anyone Who Had A Heart", but the volume and power just weren't there. I went home a bit disappointed.

At the Disney Concert Hall, Burt was accompanied by his core band, the same fabulous vocalists (Josie, John & Donna) and a string section. Everyone had fun on the stage, Burt included.

And now, here's what another concert goer, Andre B, wrote about the very same concert. The quoted text comes from http://www.bacharachonline.com/phpBB3/viewtopic.php?f=1&t=2314&start=0


<< I had never been to a concert in Disney Hall. It's a beautiful venue. There really isn't a bad seat in the house, and the acoustics are just about perfect. My seats were in Orchestra West, a balcony section with a good view of the stage.

After the medley, Josie Jones just about knocked the roof off with Anyone Who Had a Heart -- I've seen her perform this song maybe three or four times now, but this was something special. And I'm sure it wasn't just the amazing acoustics of the hall!  >>

Here's another quote, written by "heartlight" and posted also at www.bacharachonline.com:

<< I was in the Orchestra View behind the stage and at times I could not totally understand the dialogue, so thanks for repeating it...especially with regard to the new number. Josie was dynamic. >>

So here you have three folks who all agree that Josie's performance was one of the high points of Burt's concerts. It is also clear that it makes a difference where you sit at the Disney Concert Hall, as in terms of the sound, some of us had diametrically opposed experiences. On the plus side, now I know where not to sit the next time I'm there.

In summary, Burt's concerts were some of the best I've ever attended and it's a blessing that I could catch the Master multiple times. His music is timeless and will stay with me for the rest of my days. 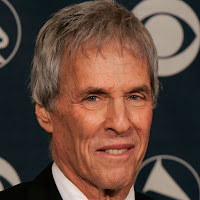