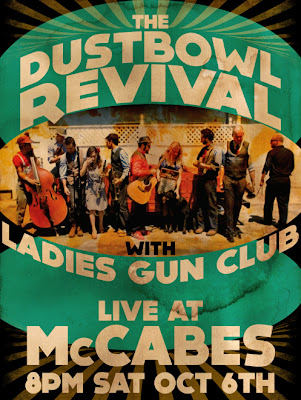 Last night at McCabe's I got my money's worth just watching the entrance of the ten outstanding musicians who call themselves the Dustbowl Revival. McCabe's has a rather small stage and it was fun observing how quickly and efficiently everyone settled in. Then the real fun began.

I will now once again use a phrase borrowed from Chick Hearn, the legendary voice of the Los Angeles Lakers: I can't say that the Dustbowl Revival is the best act I have ever seen at McCabe's. But I can say that no one's better than the Dustbowl Revival. Now that's quite a statement, considering the musical giants I have seen there over the years. The revivalists may not have the name recognition of Chet Atkins, Richard Thompson or Tommy Emmanuel, but in terms of their ability to drive me crazy with their music, they are right up there with the very best.

Zach Lupetin, the leader of the band, deserves nothing but praise for having assembled such a likeable group of talented musicians. Every so often I see musicians who emanate boredom and aloofness, but in that respect, the revivalists are firmly at the other end of the spectrum, as they exude immense joy and total immersion into their art. I loved their inventive ways of inserting humor into their act and I enjoyed the variety of musical styles they threw at us. There was little stage banter, as everyone's focus was on music.

I know the names of four of the band's instrumentalists: Connor Vance (fiddle), Dean Roubicek (sax, clarinet, flute), Ulf Bjorlin (trombone) and Daniel Mark (mandolin). If you, the reader, happen to know the names of the other musicians, please send them to me. (gabibo@gmail.com).

Most of the songs we heard last night were up-tempo and when they slowed down, they were still pretty fast. These guys don't seem to know how to slow down and that's just one of their clever ways of keeping you hooked.

Equal opportunity was the name of the game in last night's concert, as the musicians took turns at soloing. I can't pick a favorite, as they were all outstanding, but if pressed, I would mention the brass section, something we don't often see a McCabe's. Pianist Drew De Four joined the band for forty-five minutes or so, he was an excellent addition to an already remarkable gathering of musicians.

The lead vocals were delivered by Caitlin Doyle and Zach Lupetin himself, with outstanding backup from everyone else. The show opener, a song titled "Western Passage", was an instant hit with me. The brass section worked extra-hard on "Dan's Jam", a song that made me scream. "Marching On", "Mayflower", "I'll Fly Away" and their own version of "Swing Low Sweet Chariot" were also great.

After the show I bought the latest CD of the revivalists, "You Can't Go Back To The Garden Of Eden", on sale for only ten American bucks. Not bad. I also got to shake hands with Zach.

I had so much fun last night, it's hard to put it in words. The next time they play McCabe's, I'll be there with a larger group of friends. The Dustbowl Revival definitely deserve a much wider following.

The show was opened by the Los Angeles based Ladies Gun Club. I can't tell for sure whether they are a duo backed by a few instrumentalists or a bona-fide band of five. Either way, the key members are Sally Jaye and Sarah Roberts. They have dissimilar voices that sound good both separately and collectively. Their short set was quite good, definitely one of the better ones I heard at McCabe's in recent years. The songs that stood out for me were "Country Girl" and "Dublin". 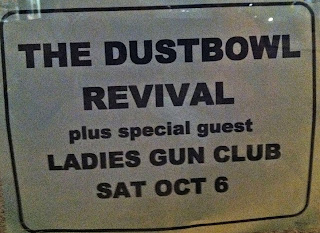