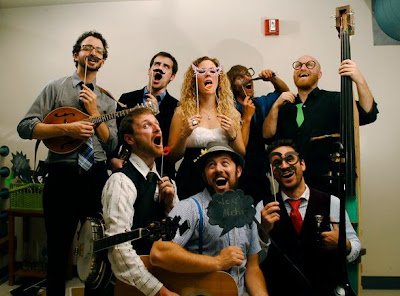 Many days after last week's appearance of the Dustbowl Revival at McCabe's, their sights and sounds kept lingering on in my head to such an extent that I had to do something about it. So yesterday I drove to Pasadena to attend a free concert that featured the revivalists, among other musicians. Organized by the merchants and restaurateurs of South Lake Avenue and named "Taste Of South Lake", the event attracted a large crowd and the folks who left the food booths behind and got closer to the stage were given a good sampling of what the Dustbowl Revival can do.

The outdoor incarnation of the band consisted of eight musicians, as opposed to the ten who took the stage at McCabe's last week. Still, the overall sound was pretty much the same and so was the energy and joy they exuded. Band leader Zach Lupetin, vocalist Caitlin Doyle, mandolin player Daniel Mark, fiddler Connor Vance and trombone player Ulf Bjorlin were among the players who were also at McCabe's last week.

They opened with "Shine", followed by "Roll In My Sweet Baby's Arms" and a rousing rendition of "Minor Swing", the old Django Reindardt classic. The always attractive Caitlin Doyle sang "What You're Doing To Me". The catchy "Western Passage" generated a vigorous response from the crowd, while Zach's call for crowd participation during the playing of "Le Bataillon" remained largely unanswered. The band followed up with "Soldier's Joy", before the grand finale that consisted of "Dan's Jam" and "Orange Blossom Special", played in quick succession with high intensity.

The concert lasted fifty minutes, not bad for a free event, and needless to say, I had a blast. I have now seen the revivalists three times and I'm amazed by the talent of these musicians. I have also seen a few line-up changes, but regardless of who showed up, the music has invariably been great.