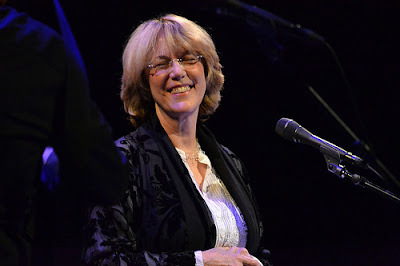 We are getting older and so does Jennifer Warnes. She is sixty-five now, yet she still sounds like Jennifer Warnes and that is no small feat. Not too many singers posses a voice that is as expressive and nuanced as Jennifer's and it is pure joy to be able to enjoy her singing in a live setting, so many years after I first heard her voice in the early seventies.

Last night's concert at McCabe's was as good as any of my previous seven encounters with Miss Warnes. Accompanied by string ticklers Billy Watts, Taras Prodaniuk and Rick Cunha, she sang many of the songs from her last year's tour, with a few welcome changes. Even though she is not known to be someone who dwells in her musical past, Miss Warnes performed a few of her older tunes, among them "I'm Restless", "Right Time Of The Night", "When The Feeling Comes Around" and Leonard Cohen's "Bird On The Wire". They all sounded good, yet the concert's finest moments, at least to these ears, came when Jennifer tackled lesser known songs, such as Ian Tyson's "Blue Mountains Of Mexico", Bob Dylan's "When The Deal Goes Down" and the absolute highlight of the evening, Blind Alfred Reed's "How Can A Poor Man Stand Such Times And Live".

Come to think of it, with one exception, all we heard last night were slow songs of essentially the same tempo. Such shows could become boring pretty fast, yet there wasn't a trace of boredom last night at McCabe's. On the contrary, the audience, myself included, remained fully engaged and thoroughly entertained, courtesy of Jennifer's humility, warmth and, most of all, her voice.

The only fast song of the entire evening was "God Doggit, Baby", a humorous song written by the little-known Michael Smotherman and delivered by Jennifer complete with her favorite snail joke.

Guitarist Billy Watts doubled up as Jennifer's singing male partner, as together they performed "You Don't Know Me" and "Up Where We Belong". His outstanding playing of the guitar intro to Alfred Reed's "Poor Man" prompted Jennifer to ask him to play it again.

Also among the evening's highlights were Mickey Newbury's "So Sad", Allen Toussaint's "It's Raining" and the show opener "Carrying A Torch", from the repertoire of Van Morrison. For her one-song encore, Jennifer picked Bob Dylan's "Make You Feel My Love" which sounded fabulous.

My small group included our friend Deborah and extended family members Nancy and Jim. We all had a great time and something tells me that the next time Jennifer is in town we will all be back.