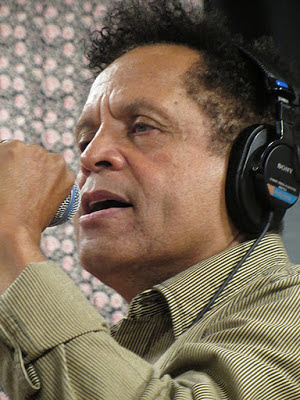 As I was watching Garland Jeffreys perform Sunday night at McCabe's, I kept asking myself how many other hidden treasures are out there, unknown even to folks like me, and I'm someone who digs a lot deeper than the average music fan. Funny thing, though, in Garland's case, it was Lincoln Myerson's word that brought me to the show and not my own due diligence. Lincoln is the Concert Director at McCabe's, and as such, his musical recommendations carry quite a bit of weight.

Garland and his band came out at 8:20 PM and without wasting a second, they began to rock with intensity and passion. From the get go, I was stunned by the quality of Garland's voice - he's 69-years old yet sounds decades younger. And what can I say about the songs ... Without exception, they were all love-at-first-listen and later that evening I learned that all those great numbers had the same composer: Garland Jeffreys himself. I was impressed. His set also included two well-chosen covers, "A Hard Rain's A-Gonna Fall" and "96 Tears" and they both sounded great.


Garland left the stage a couple of times and wandered away into the dark concert room so that he could be closer to his fans. I high-fived him during one of those excursions, that was fun. Overall, his energy level was high and his voice never faltered. I liked his rapport with the other musicians on stage as well as the audience. There was some talk, but nothing excessive.
GARLAND JEFFREY'S BAND

Rarely have I seen a backing group that grabbed me like Garland's band. They were fun to watch and even more fun to listen to, whether they rocked or played reggae. I loved observing Tom Curiano's facial expressions and his drumming was as good as anything I have ever witnessed. Adam Roth's guitar playing was equally good and I screamed with excitement when Charlie Roth played the famous opening notes of "96 Tears". By the way, Charlie is Adam's brother.


Picking a show highlight is no easy feat, as I liked everything Garland sang. Six of the songs he sang came from his most recent album, "The King Of In Between", released in 2011. Those songs were all outstanding so, needless to say, I promptly bought the album after the show. I also bought an older album, "Ghost Writer", initially released sometime in the seventies. Good album, too.


Garland and his band mingled with the fans after the show and it felt good telling him how much I enjoyed my introduction to his music. I wasn't lying - Garland's show was one of the best I've ever seen at McCabe's and I did see a few. I will definitely catch him again the next time he's in town.