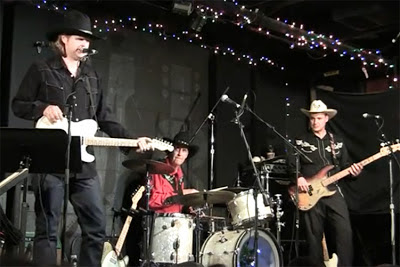 Announced as The Third Annual Jackshit Holiday Extravaganza, the concert was indeed extravagant, as the Boys from Cochtotan brought to stage not only their own brand of great music and humor, but also a record number of four surprise guests. Over the years, the band has been spoiling its fans with such unannounced guests and a welcome trend is clearly developing: as the fame of the band grows, so does the caliber of their guests.

The evening did not start well for me. I got in line at 5:15 PM in order to get front-row center seats for my wife and I. Quite often, folks associated with various performers are allowed in before doors open to the general public, but those folks never take the best seats in the house. That's just basic courtesy to the performer's best fans, the ones who wait in the street for hours. Sadly, such courtesy was not present Friday night, so we ended up not sitting where we wanted to sit.

The show started with four predictable songs, followed by the seldom-played "Hung It Up", from the repertoire of Junior Brown. Next, the band brought out Johnny Shit, known to many as Jonathan Rice, the up-and-coming musician of some talent who's also half of the Jenny & Johnny duo. Johnny sang only one song, "Carpetbaggers", which I believe is the duo's best.

Surprising everyone, drummer Pete Thomas walked up to the front of the stage, picked up a guitar and, with nine-year old Ringo Shit taking his place behind the drum set, he sang "Run Run Rudolph", the classic song made famous by Chuck Berry. By the way, Ringo Shit's real name is Charlie. He is Shorty Shit's son. Charlie's drumming skills are fast developing and it won't be long before he becomes an accomplished drummer.

The next guest, introduced as Mama Shit, was none other than the much-acclaimed Lucinda Williams, the three-time Grammy winning singer-songwriter whose raw singing style has never fully connected with me. She sang three songs, including her own "Still I Long For Your Kiss" and Boz Scagg's "Loan Me A Dime" and I liked them all. Seeing Lucinda live was a totally different experience from listening to her recorded music - my mind has been opened and I'm ready now to seriously start exploring her back catalog.

Shorty Shit was in his usual great vocal form. I liked his singing of "The Seeker", the classic song of the Who, and especially the Band's "Cripple Creek".

The Shit Horns made their usual brief appearance, but this time there was no "Ring Of Fire" and no "Lonely Bull". Instead, they helped out on "The Magnificent Seven" and "Ghost Riders In The Sky", a song that also featured Shorty's laughter-inducing high falsettos.

The third surprise guest of the evening was Grammy-winner Dave Alvin, a huge favorite of mine. Playing electric and enjoying every minute of his presence on stage, Dave delivered four great songs that were exceptionally well received by the crowd. My favorite was "Johnny Ace", the sad story of the demise of the young R&B star in 1955. For more on Johnny Ace's death and the controversy surrounding it, click on this link: http://en.wikipedia.org/wiki/Johnny_Ace. Dave's set ended with a rousing rendition of "Marie Marie", a song he wrote during his days with the Blasters.

Since 1990, I've seen Dave Alvin in concert close to twenty times and all of these appearances were acoustic. Nothing wrong with that, but Friday night's electric sounds were something to behold and I would be absolutely thrilled to watch Dave in an all-electric show at McCabe's.

The fourth and final guest of the evening was guitar legend Albert Lee, yet another Grammy winning musician. Initiated by Beau Shit's invitation to take the stage, Albert's appearance was an impromptu affair that provided some of the evening's finest moments. Albert remained on the stage for two songs, "You'd Better Get Right" and "Cripple Creek". The extended intro to the former featured a visibly thrilled Val McCallum sitting on the stage and trading guitar licks with Albert, who loved the moment himself.

The concert wrapped up with yet another endearingly sloppy delivery of Rodney Crowell's "Bull Rider", followed by the usual epic playing of Johnny Horton's "I'm Coming Home", with the band firing on all cylinders. The boys came back for a one-song encore, Randy Newman's "Louisiana", quite predictably.

Given the prevailing Christmas spirit, the Boys From Cochtotan left out a few often-played murder songs, so we did not get to hear "Long Black Veil", nor "Pretty Polly". I would have loved to hear the latter.

For Friday night's Jackshit concert I bought a record number of 35 tickets, which went to a lucky group of friends and coworkers, with many first-timers among them. Everyone loved the show, no exceptions, and most of them want to see the band again. Some of them appear in the following photos.


My friend Steve had the time of his life when, after the concert, he met Lucinda Williams, one of his all-time favorite singers. Steve described Lucinda as very friendly.


My interest in catching Jackshit's live shows remains at its peak and so is my desire to spread the word and bring yet more folks to see them perform.

By the way, this was my 333rd McCabe's concert, a number that just makes me shake my head in disbelief. 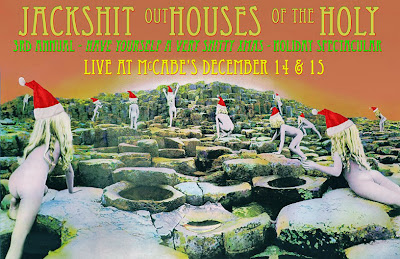