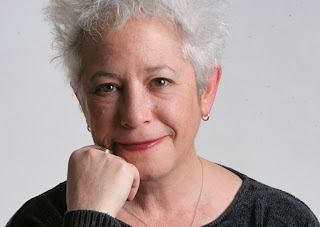 Janis Ian's appearance last Sunday at McCabe's started with a deep and prolonged bow. Two hours later, an identical bow marked the end of the show. Artists with class would treat their audiences like that and there's no better word than "class" to describe Janis Ian, the musician. Or Janis Ian, the human being, for that matter.

The evening kicked off with an unannounced opening set featuring Diana Jones, a critically acclaimed singer-songwriter I knew precious little about. I liked her set, but it took me some time to get used to her unique singing voice. There was only one song that did not connect with me, melodically speaking, everything else sounded very good. Diana's best songs were "Henry Russell's Last Words" and the set-ending "A Hold On Me". For the singing of the latter, Diana was joined on stage by Janis Ian, who then stayed on to deliver her own set.

This was my third time to see Janis Ian solo in concert and even though I knew exactly what to expect, Sunday night's show was as good as the first two. On the stage floor, right at her feet, there was a sheet of paper with lots of song titles, not a true set list, but more like a pool of songs to draw from.

Janis opened her set with "Through The Years", followed by one of my all-time favorites, "When The Party's Over". Next in line was "Society's Child", complete with a story about the difficulties she had encountered in the 1960s to get any air play for this hard-hitting song. Serious topics and moments of levity marched together throughout the evening, masterfully intertwined by Janis to both comedic and thought-provoking effect. "My Autobiography" sounded as funny Sunday night as it did in 2006, when I first heard it. I also enjoyed "The Tiny Mouse", a not-yet-released song written by Janis at the request of Cleo Lane, the British singing star known since 1997 as Dame Cleo Lane. The evening's first set wrapped up with "Bright Lights And Promises", during which Janis put on display her guitar-playing prowess.

After a short break, Janis came back to the stage, expressed relief about her audience still being there, then launched into "Water Colors", arguably the evening's best vocal performance. "Married In London", a song that addresses the controversial issue of same-sex marriage in a humorous way, generated a lot of laughter in the room. Many decades after it first came out, "Tea And Sympathy", another old favorite of mine, still sounded great and so did "Light A Light" and the somewhat newer "My Tennessee Hills". The set ended with a heartfelt rendition of Janis' signature song, "At Seventeen".


For her two-song encore, Janis brought out Diana Jones, with whom she sang "I'm Still Standing Here", a newer composition. Then, after Diana left, Janis put her microphone down, seated herself on her guitar case and closed the evening with a soft rendition of "Jesse", one of her better-known songs.


Even though I was there for the music, I really enjoyed the moments of spoken word, which were delivered by Janis with her impeccable diction in a voice that was warm, calm, and above all, convincing. Throughout the concert, Janis laughed a lot, and so did we, the spectators. I said it in the first paragraph of this write-up, let me say it again: Janis Ian is a class act, if there ever was one. 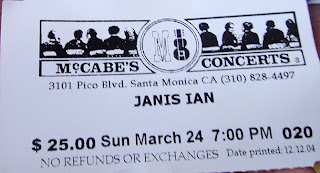