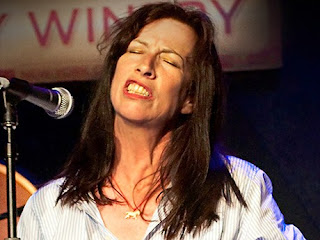 Q: Have you seen Syd Straw before?
A: Yes. Eight times. Three times in a headlining role, five times as someone's guest.

Q: When did you first see her?
A:  Exactly ten years ago, also at McCabe's. She blew me away then, been a fan ever since.

Q: Was last night's show sold out?
A: It looked like a sellout. Maybe a couple of empty seats in the back.

Q: Your overall impression?
A: Very favorable. It was a highly entertaining show, without a single minute of boredom.

Q: How was Syd's voice?
A:  Never better. I was amazed by the expressiveness and precision of her voice.

Q: Were her songs easy to sing?
A: Not at all. Most of her song require great vocal skills and Syd delivered flawlessly.

Q: Compared to ten years ago, did she sound better or worse?
A: Definitely better. Syd is one of those vocalists who just keep getting better with age.

Q: Syd is known for bringing unannounced guests along. Were there any last night?
A: Three guests: Dave Alvin, Cindy Lee Berryhill and Mark Boone, Jr.

Q: Was that Mark Boone, the actor?
A: Yes. He played guitar on "You Had Your Chance", a song he wrote with Syd for the late Vic Chesnutt.

Q: Did Dave play acoustic or electric?
A: Electric, and it was great.

Q: Syd always talks a lot on stage. Did she go overboard last night?
A: I wouldn't say that she went overboard, but there was a lot of talk, that's for sure.

Q: Was she funny?
A: Yes. She is a genuinely funny lady, capable of putting a humorous spin even on tragic events.

Q: Did she perform solo?
A: Except for the two opening songs, Syd played with a band.

Q: How was the band?
A: The band was great. No flashy solos, but one could tell that all musicians were top-notch.

Q: Who's Severo, the bass player?
A: He is a member of the Smithereens.

Q: And who's Ed Marshall?
A: He plays with the Ooks of Hazzard.

Q: Any interaction between Syd and the band?
A: Lots of humorous interaction, with Willie Aron in particular laughing his head off.

Q: How was Cindy Lee?
A: She was quite good. Much better than the first time I saw her last year.

Q: What songs did Syd sing?
A: Most songs came from "Pink Velour", her most recent CD. The ones I remember are "Marry Me", "About To Forget", "My Ship Comes In", "Pink Velour" and "Unraveling".

Q: Any cover songs?
A: A few. Among them, Warren Zevon's "Mutineer".

Q: The show highlights?
A: Syd's voice. Also Syd and Dave Alvin together.

Q: What did she sing with Dave Alvin?
A: They sang three songs together. The first one was "Why Not Me", from the repertoire of the Judds.

Q: The second one?
A: The second song was a powerful rendition of "The Stranger I Live With", an outstanding Syd Straw composition that appears on "Pink Velour".

Q: And the third one?
A: The third one was "What Am I Worth", the George Jones classic, recorded two decades ago by Dave and Syd for Dave's "King Of California" album.

Q: Would you want to see Syd Straw again?
A: Absolutely. In a heartbeat.