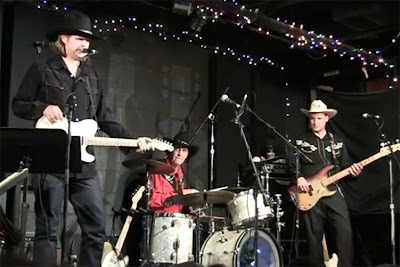 Q: Let's talk numbers. How many times have you seen Jackshit in concert?
A: This was my 29th time to see them live in concert.

Q: That's crazy, don't you think so?
A: It's only crazy from the perspective of someone who has not seen them perform. You see them once, you're hooked for life. I'm only a passionate fan, not an OCD sufferer

Q: How much variety do you find in their shows?
A: Their shows follow pretty much the same path, so I can't say that any given show is strikingly different from the one before.

Q: So what makes you want to see them so often?
A: What attracts me time and time again is their exceptional virtuosity. These guys are devilishly good. Val McCallum's guitar playing is right up there with the very best and if Dave Faragher is good enough for Elvis Costello, then he's certainly good enough for me. And there's a good reason why Pete Thomas is in the Rock & Roll Hall of Fame: he plays the drums like few others. Put these guys together, and what you get is an exciting power trio that adds good humor and stellar song selection to their musical prowess.

Q: Last night's show came just hours after the death of George Jones. Did the band acknowledge his passing in any way?
A: Yes, they did. They played an outstanding version of "White Lightning", then later in the show, when unannounced guest Jackson Browne took the stage, they delivered "The King Is Gone", a song written by George Jones shortly after Tammy Wynette walked out on him.

Q: So Jackson Browne guested once again ...
A: Yes. He's a friend of the band, so his appearances are almost taken for granted.

Q: What do you mean "yes and no", that makes no sense.
A: Let me explain. Just take a look at Val McCallum's Facebook page, the way it appeared on the day of the show: 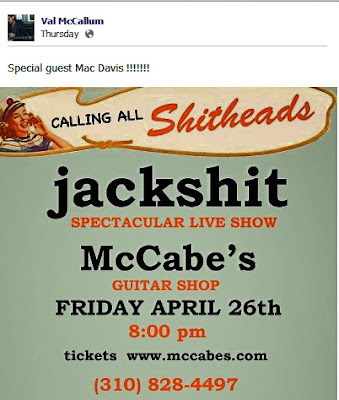 Q: Wow, Mac Davis guesting with the band, I'm sure you were all excited. How was he?
A: He never showed up. I'm convinced this whole thing wasn't just a joke, as Val kept looking for Mac to make his entrance, but he never came. The band went on and played the four Mac Davis songs they were supposed to do together - "Baby Don't Get Hooked On Me", "You're Having My Baby", "In The Ghetto" and "I Believe In Music" - when mid-way through the latter song, a man armed with a guitar joined the band. Assuming that the man was Mac Davis, the crowd exploded with enthusiasm, only to learn that they were applauding the world's first and only Mac Davis impersonator. Like everyone else, I was a bit disappointed.

Q: What else did Jackson Browne sing?
A: After his tribute to George Jones, Jackson sang his own "Shaky Town", then later, when he came back for the encore, he did "Take It Easy", the monster hit he wrote for the Eagles. Jackson sounded and looked good.


Q: Any new additions to Jackshit's long list of covers?
A: Yes. Along with two young guests, they played the Who's "My Generation".

Q: Who were the guests and how young were they?
A: Well, I don't think either of them was older than ten. Charlie Faragher replaced Pete Thomas on drums and impressed me with his much-improved drumming. The vocals were delivered by someone introduced as "Uncle Nick" and he was good, too.

Q: Did Jackshit have a set list?
A: Yes, and with small exceptions, they followed it.

Q: Your overall impression?
A: As always, I had a heck of a good time and I'll be back for more. 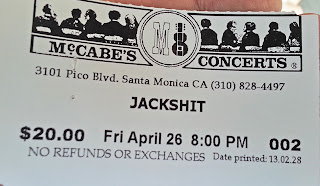