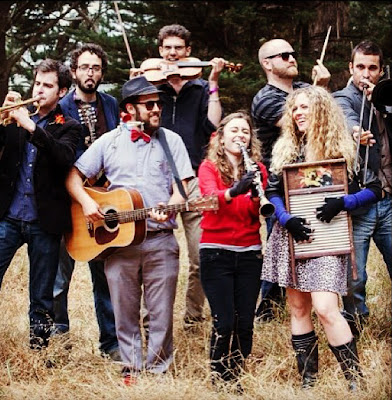 Q: Was this your fourth time to see the band in just about one year's time?
A: Indeed. I first saw them perform at McCabe's Guitar Shop in Santa Monica in March 2012 and, right there and then, I became a huge fan.

Q: Can you say a few words about last night's venue?
A: Claremont's Folk Music Center is a jewel of a store and occasional concert venue. The place is owned by Ben Harper, who has kept the store's old-school look pretty much intact.

Q: Great stores don't necessarily make for equally great concert venues, do they?
A: Some do, some don't. Hollywood's Amoeba Records is a fabulous store, but not the best place to see a concert, not even a free one. McCabe's excels in both categories, mostly thanks to the availability of their back room, where a proper stage could be built and a decent number of seats can be placed.

Q: So how's the Folk Music Center?
A: They only have one room, so their options are limited. Located in the far left corner of the store, their stage is quite small and it only rises six or seven inches above the floor level. This means that  most spectators will not have an unobstructed view of the performers.

Q: How was the sound?
A: Quite good, there were no problems at all with the sound.


Q: So how many people showed up last night?
A: Seventy-five, which is the full capacity of the room. My impression was that many of the spectators came to see the Wild Reeds, the opening act, a band with strong local connections. Sadly, some of their fans left during the intermission, so there were a few empty seats when the headliners took the stage.

Q: With only about seventy-five tickets sold, the artists did not make a financial killing, did they?
A: Not at all. Tickets were priced at the mystifyingly low amount of ten bucks each. You do the math. Ten bucks is a ridiculously low amount. Ten bucks won't even get your car parked at most LA concert venues.

Q: Let's talk about the Dustbowl Revival. How were they?
A: The short answer is "they were great". But there's more to it. Somewhat understandably, they brought to Claremont a stripped-down version of the band that I saw in action in Santa Monica and Pasadena. I did miss some of the absentees, particularly the three-piece brass section, a key part of the overall sound of the band. But it wasn't all bad: instead of a full brass section, we got to enjoy Ron Sewer's stellar trumpet playing. Vocalist Caitlin Doyle did not appear either, but her replacement, Kate Nicholsen, was equally good, I really liked her vocals on "Riverboat Queen".

Q: What was the band's line-up?
A: Last night's incarnation of the band was a septet, as in a group of seven players:

Q: So how did the absence of the brass section affect the show?
A: That's easy to answer: the band simply stayed away from the brass-heavy songs of their repertoire, so there was no "Dan's Jam", no "Western Passage", no "Lowdown Blues" and no "Marching On". Instead, the band focused on their brand new album, "Carry Me Home" and that wasn't a bad thing at all.

Q: Any other songs worth mentioning?
A: Well, they played a total of twelve mostly uptempo songs, they all sounded good, especially "Early In The Morning", "Who Threw The Whiskey In The Well" and "Ain't Nobody Gonna Bury Me", although this may not be the correct title.

Q: Your overall impression of last night's concert?
A: Well, it took me a couple of songs to get used to the smaller size of the band, but pretty soon their infectious music grabbed me and never let me go. I could definitely call myself a satisfied customer. Whether their sound was bluesy, jazzy or folksy, the band sounded great last night and I enjoyed those few blistering trumpet, fiddle and mandolin solos. The whole concert was exceptionally well paced from start to finish. Zach Lupetin, the leader of the band, is a very special artist. He deserves kudos for his soulful singing, incredible songwriting, clever production and most of all, for having assembled such a great group of talented musicians. The Dustbowl Revival is a truly amazing band that's probably not too far from getting the national recognition they so richly deserve.

Q: The best song of the evening?
A: "Swing Low", the song that wrapped up the evening, performed with the help of the Wild Reeds. Great harmonies.

Q: A few words about the Wild Reeds?
A: It was my first exposure to the music of the trio. There are many other acts out there that are young and talented, but the Wild Reeds possess three assets that one day could bring them wider success: their voices. They also seem to be an inventive bunch, as there was plenty of variety in their forty-minute long set.


Q: Did you bring a few friends to attend the concert?
A: Yes. I bought twelve tickets that went to some of my friends. Most of them were unfamiliar with the Dustbowl Revival.

Q: So what did the newbies tell you after the concert?
A: They all loved the show, without exception. They all want to see them again.

Q: And you?
A: I will continue to follow the band and the next time they play McCabe's, I will show up with a larger group. 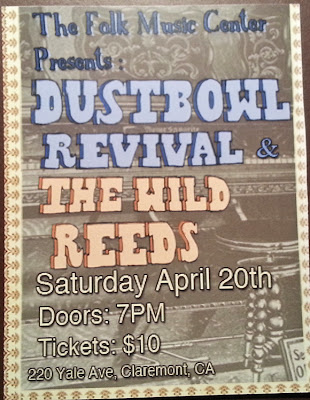 Email ThisBlogThis!Share to TwitterShare to FacebookShare to Pinterest
Labels: Dustbowl Revival (The), Wild Reeds (The)