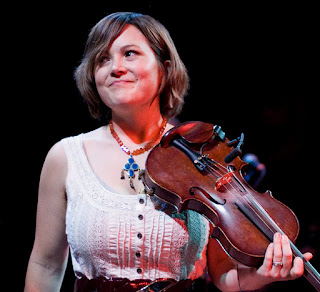 I first saw Sara Watkins three years ago, when she opened for Vienna Teng at McCabe's Guitar Shop in Santa Monica. Since then, Sara has become a highly visible presence on the Los Angeles music scene, so I leaped on the opportunity to see her again at my favorite venue, this time in a headlining role. And I did have an inkling that some unannounced guests were likely to pop up. So did they? Read on.

Sara and her band took the stage while the PA system was playing "Amor De Loca Juventud", a popular Cuban song. This thing intrigued me quite a bit, but Sara, without offering an explanation, launched straight into "Lock And Key", a song that appears on "Sun Midnight Sun", her second and best yet album. A great song, I must add, but the mystery of the inclusion of a Cuban song remains unexplained.

Early in her set, Sara brought out Blake Mills, the young producer of "Sun Midnight Sun". I became acquainted with Blake's dazzling guitar playing last year, when he guested on Val McCallum's solo show. Now I know that he's a lot more than just a virtuoso guitarist. His sophomore producing effort yielded an exceptionally listenable album, with rich sounds and plenty of variety. Moreover, he co-wrote a few of the songs appearing on the album. Keep your eyes and ears on Blake Mills, he is a special talent.

And speaking of talent, Sara is no slouch herself. From singing to fiddle playing to songwriting, Sara does it all. One of the best songs of the evening, "You And Me", was written by Sara herself.

Sara's set included a number of cover songs and some sounded better than others. Tom Waits' "Pony", delivered by Sara without the accompaniment of the band, was an absolute delight. It was also a rare opportunity to truly enjoy Sara's delicate voice. I was less enthralled by her treatment of Linda Ronstadt's "Different Drum" and Bob Dylan's "Senor".

The entrance of unannounced guest Fiona Apple gave me a huge thrill. She remained on the stage for twenty minutes or so. Together with Sara, Blake and the band, she helped out on three songs:

To these ears, the best two songs of the concert were "You're The One I Love", sung with high energy by Sara and Fiona and Bob Dylan's gorgeous "Tomorrow Is A Long Time", the song that wrapped-up the evening. The latter song was delivered by Sara and Sean completely unplugged, with the purity of Sara's voice once again taking center stage.


Sitting close to the stage, just a few feet away from a full drum set, is a risky affair. I don't know how the drums sounded in the back of the room, but in the second row, where I was sitting, the drums were too loud and a few times during the show they overpowered everything else, including Sara's delicate voice. But it wasn't all bad: other than the high volume, I really liked Mark's drumming and I found myself observing him quite often.

The concert kicked off with a short set delivered by Seattleite Kris Orlowski, an emerging musician of some talent. I liked his songwriting, I liked his singing, I liked his stage presence, but I had a problem with his song selection. In spite of all the aforementioned "likes", Kris' set did not get my toes tapping and did not make me want to jump up on my feet. I know, I know, I'm difficult to please on Friday nights, but one slow song after another was not the shot in the arm that I needed at that late time of the week. Still, Kris deserves credit for his well-crafted songs, among which "Warsaw" and "All My People" stood out. 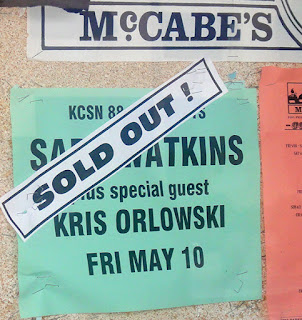